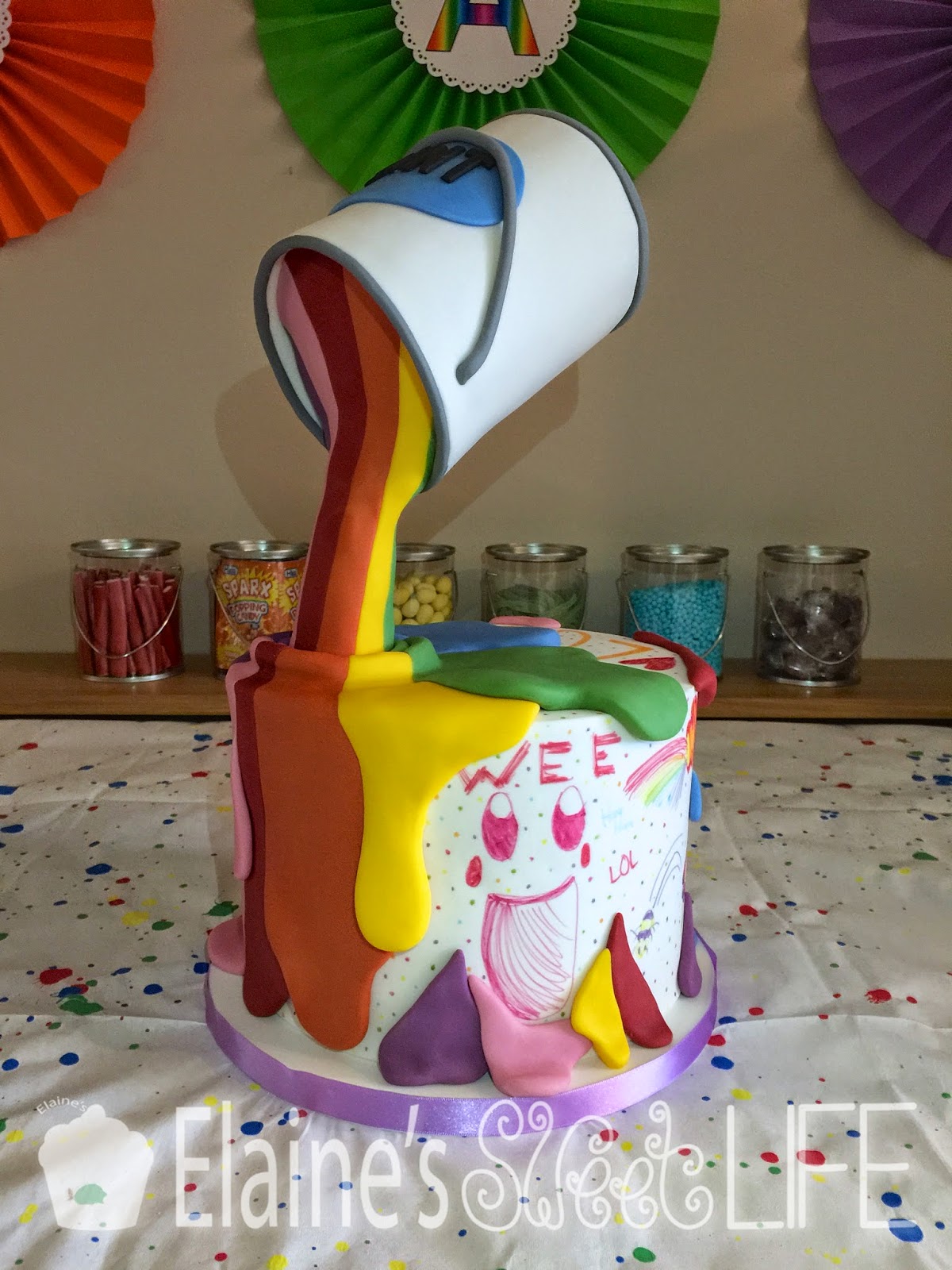 My little girl is very artistic, and will spend hours every day drawing and creating. This year she decided she wanted to have an Art theme for her birthday party. As we started coming up with various ideas for the party, we decided that we would pair the Art theme with rainbows as well, as we thought it would make for a very bright and cheerful party. 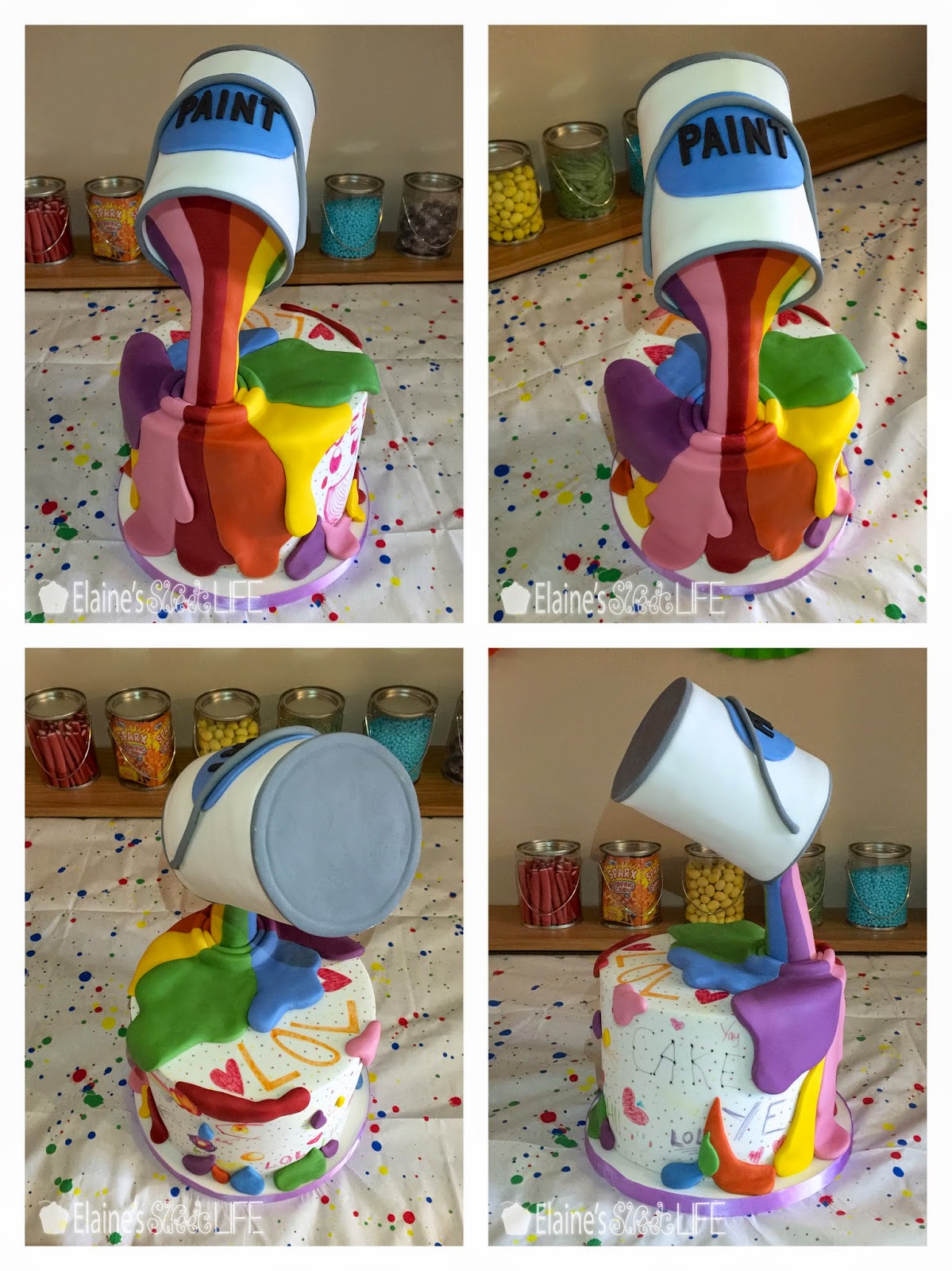 The cake is gravity defying, with rainbow cake in the paint can as well as the cake itself. The sponge is filled with vanilla icing, then covered with milk chocolate ganache and fondant. 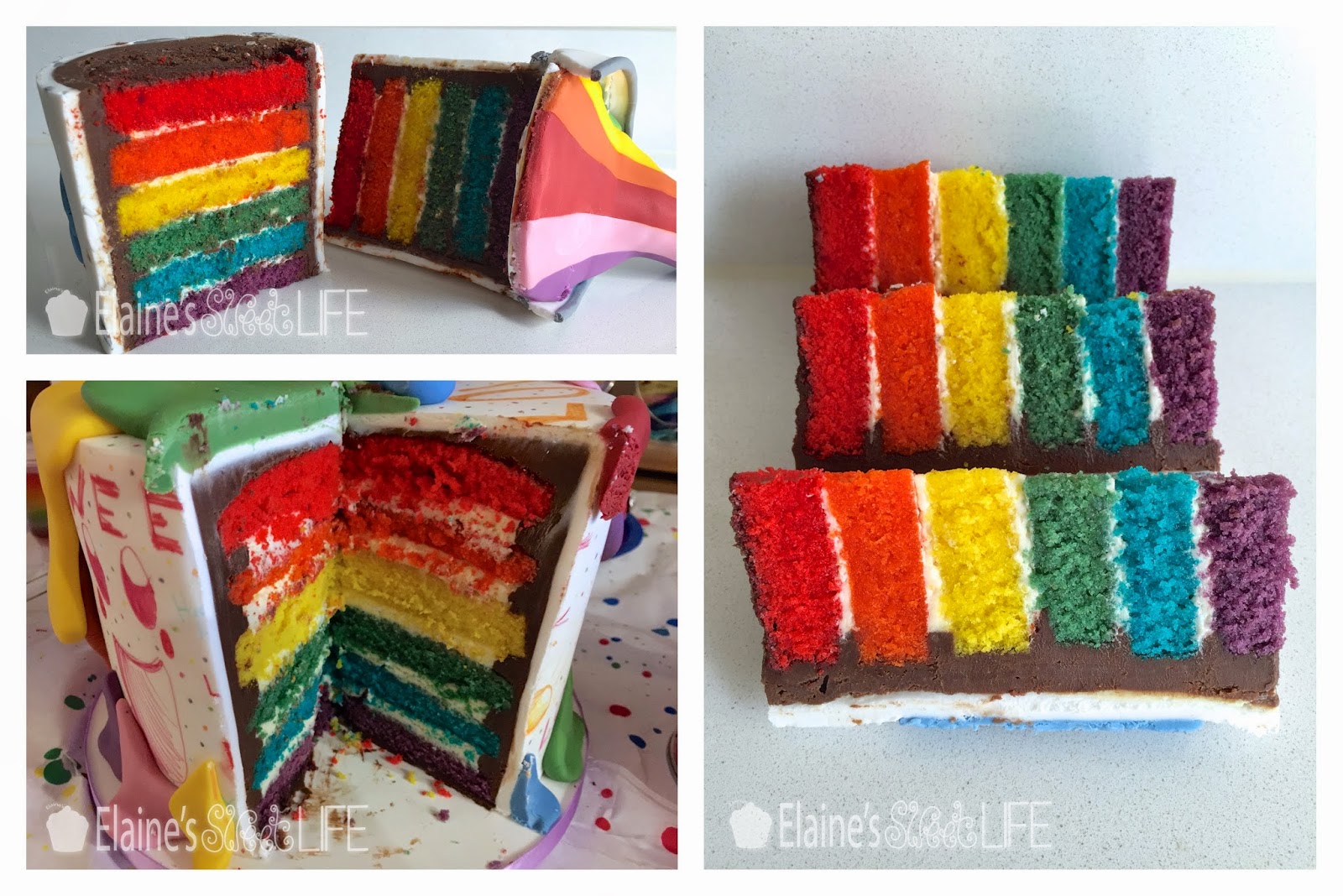 Natasha decorated the white fondant by drawing all over it with edible markers, before I added all the 'spilled paint'. 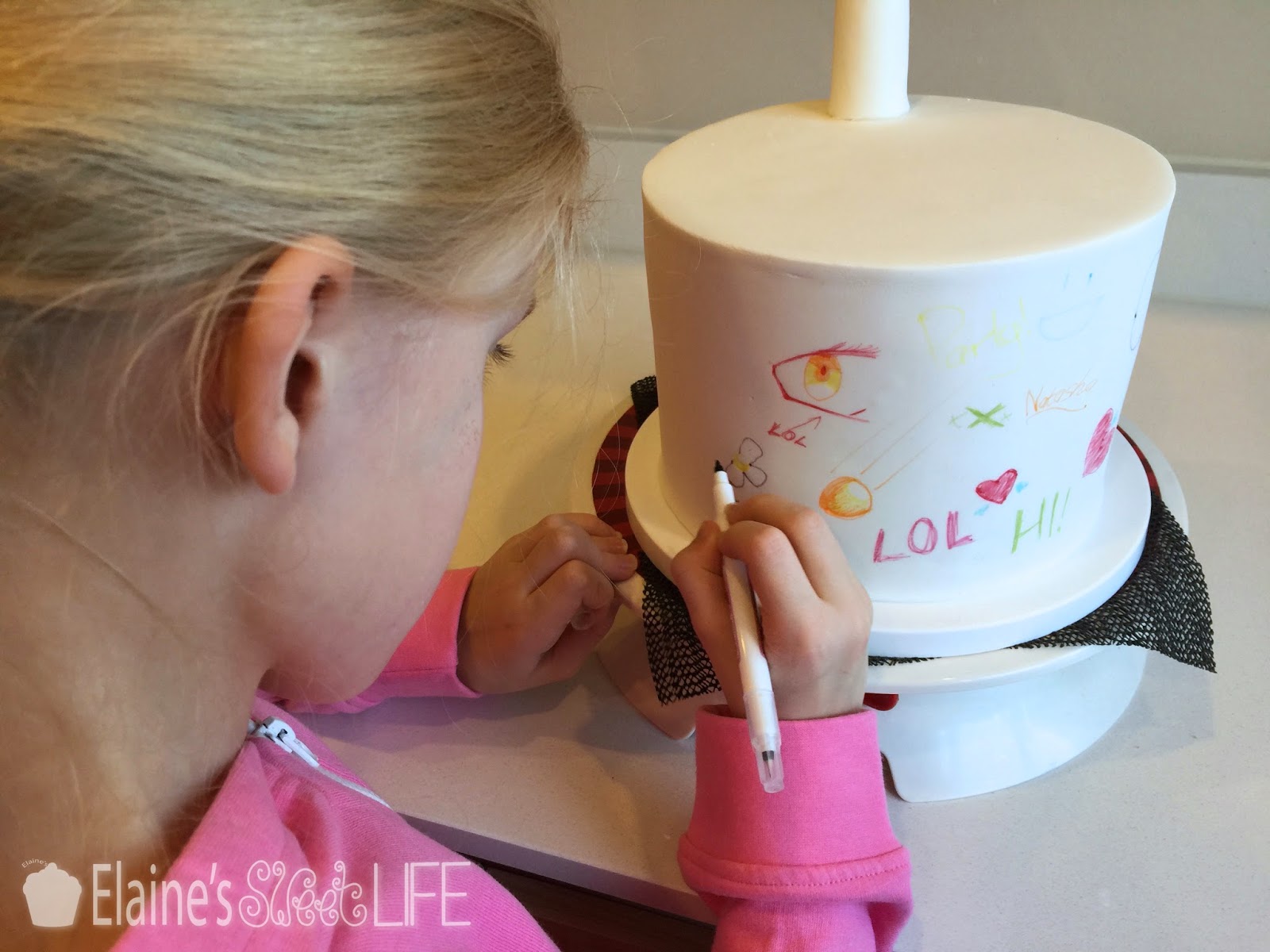 For about 2 weeks before the party we were busy making all the bright, rainbow coloured decorations to hang around the room: 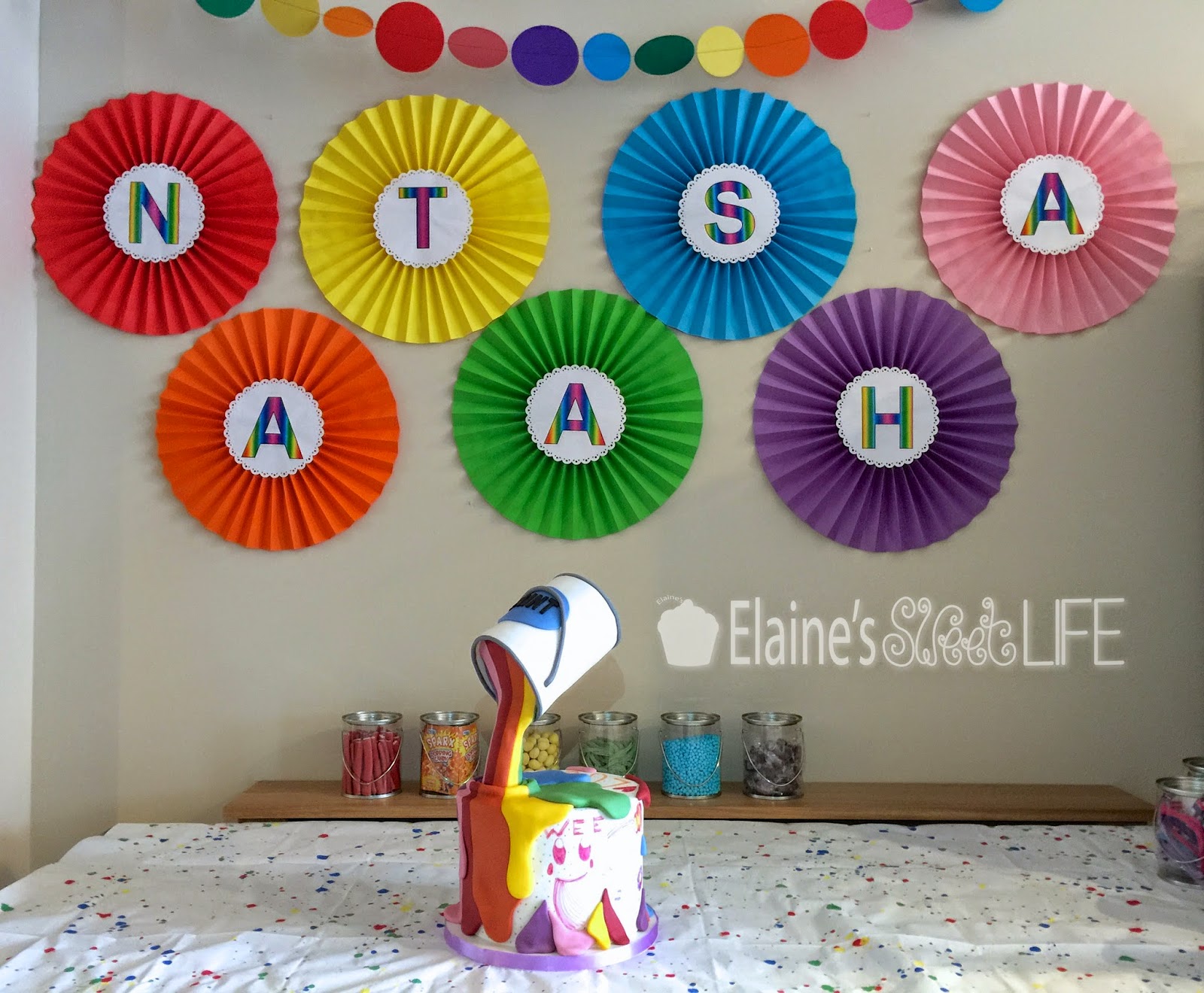 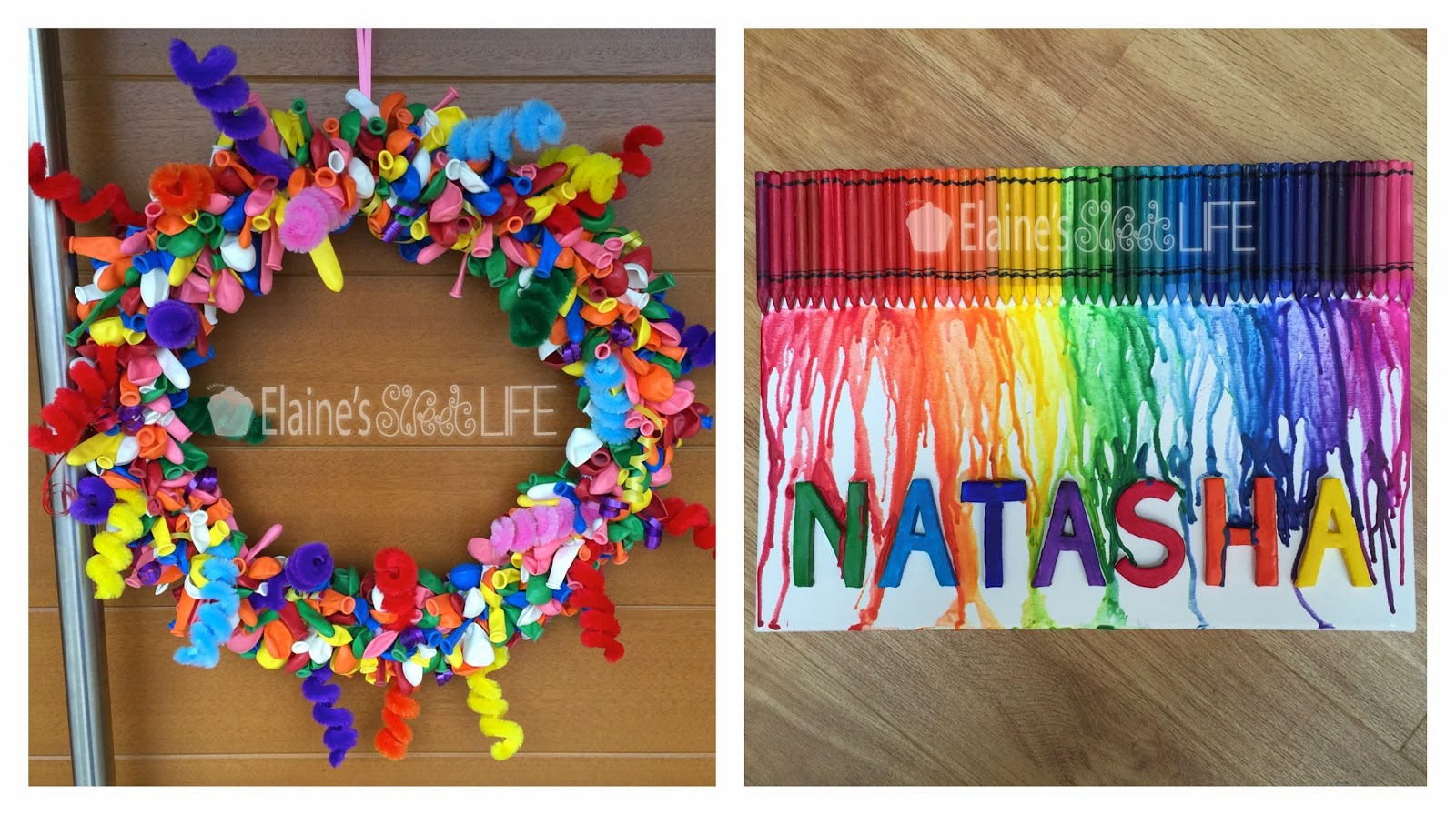 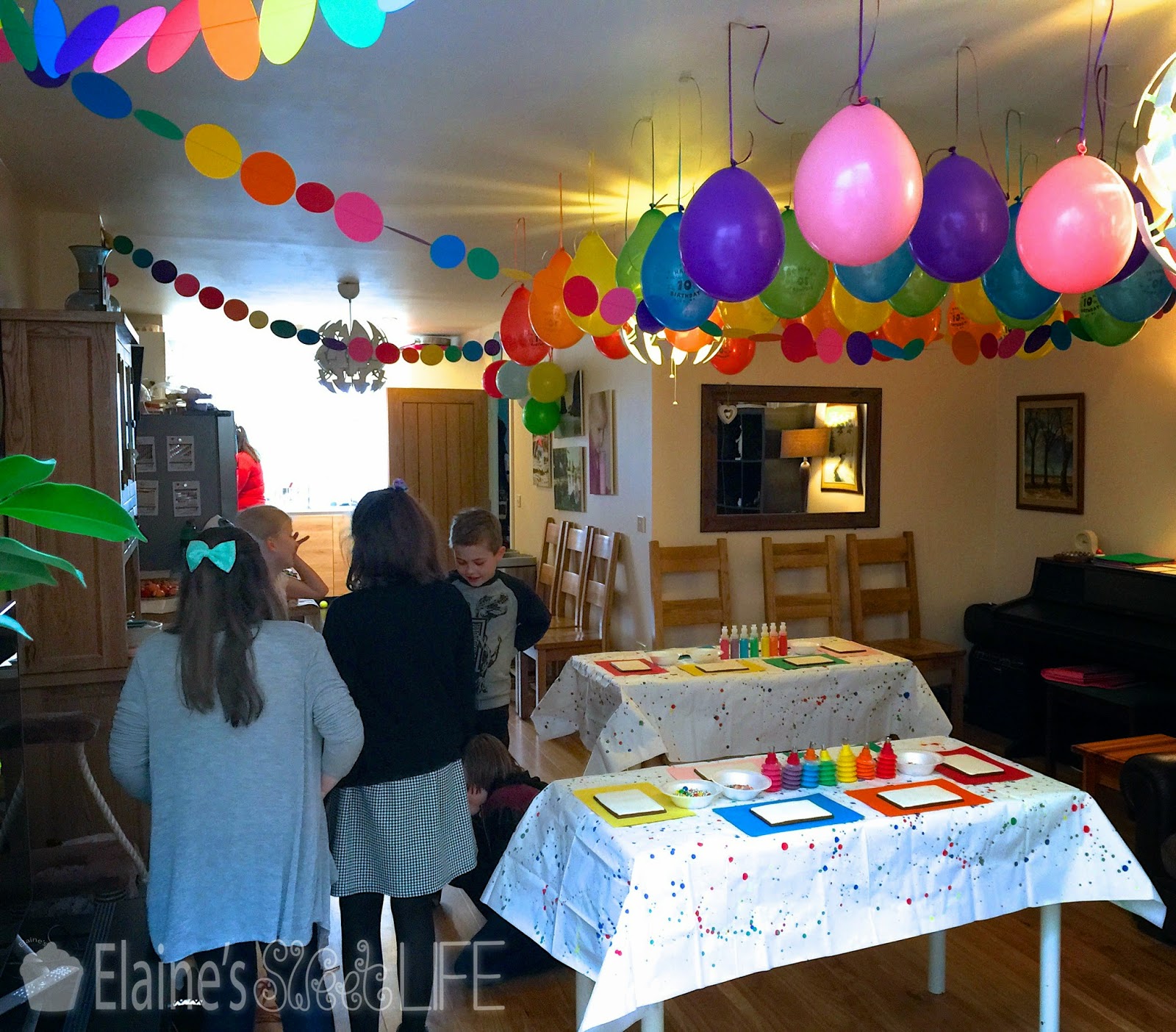 The party food was also rainbow coloured (wherever possible). 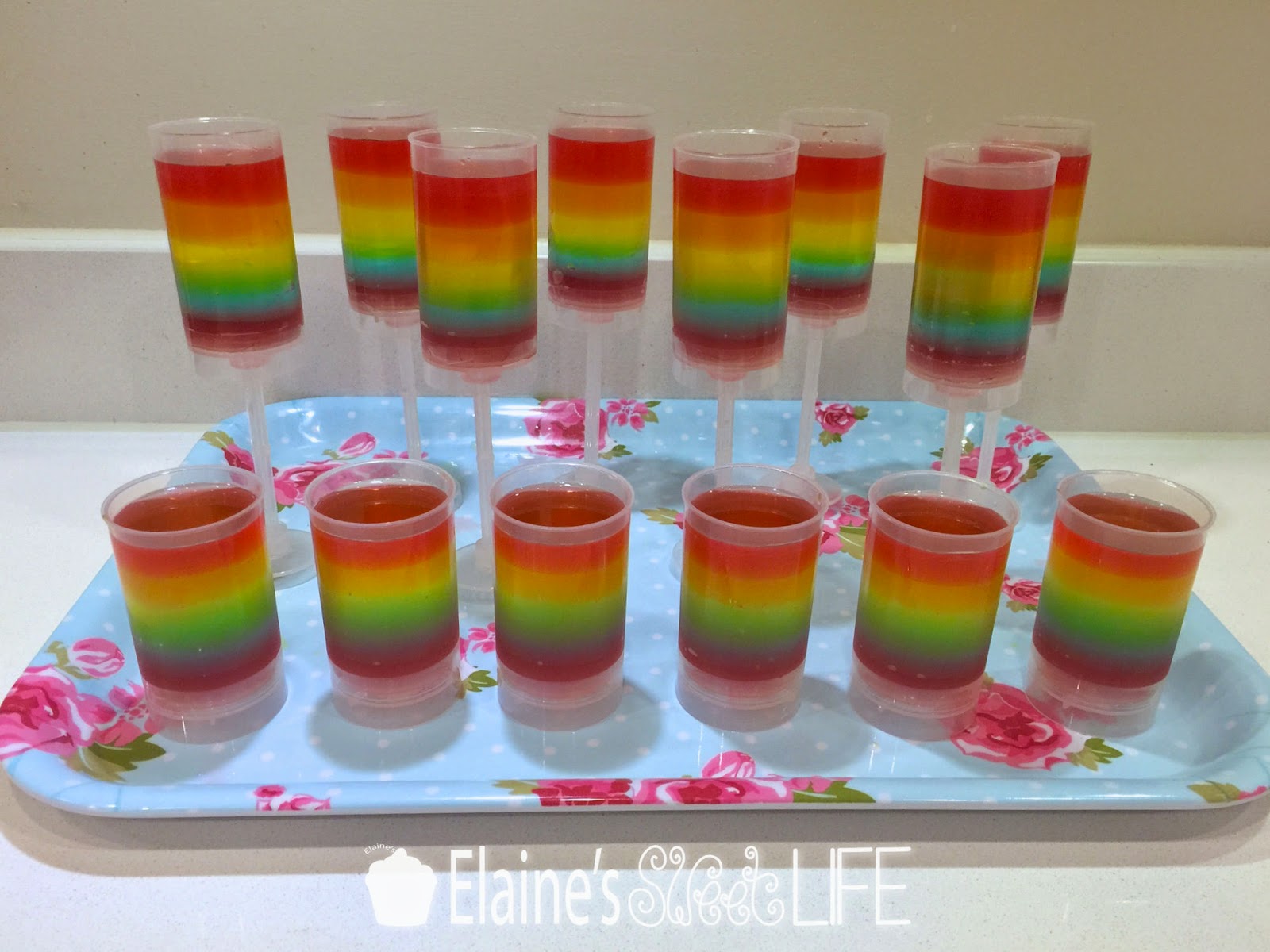 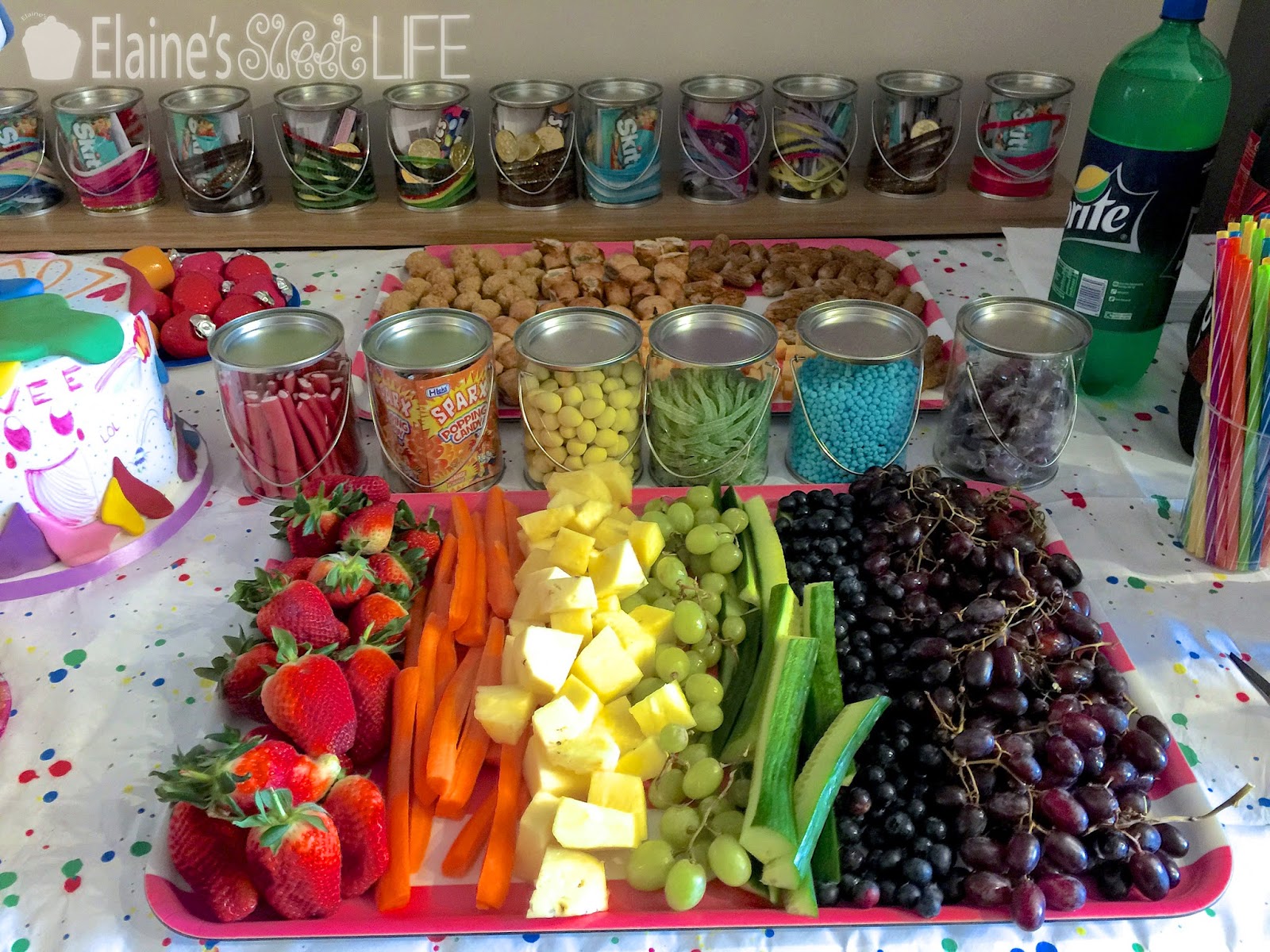 We even had rainbow coloured plates and straws. 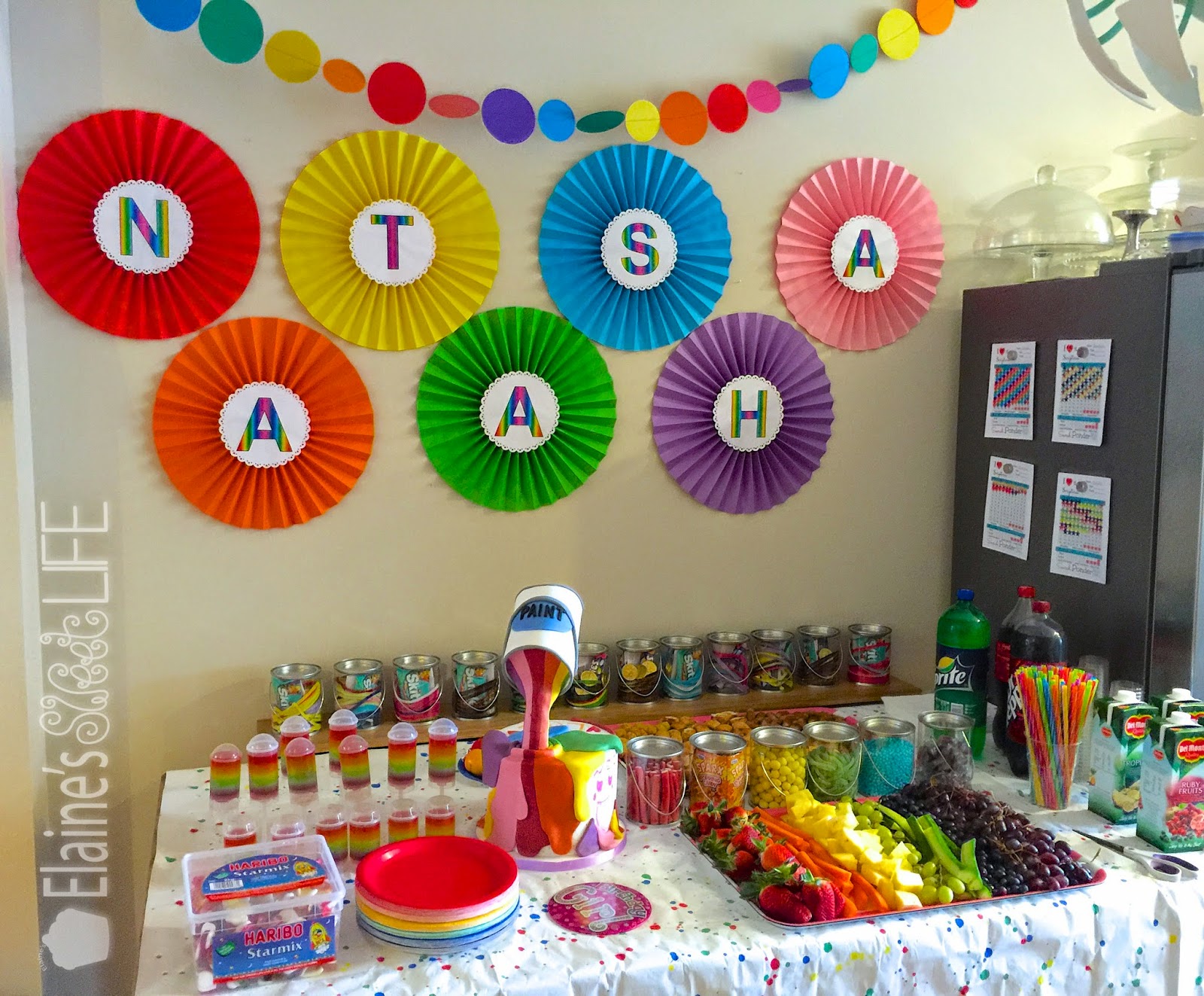 All sitting in a row at the back of the table, you can see the party 'bags' for the guests to take home. Each pot contains a little pipe cleaner craft project (to make little monsters) and some candy. 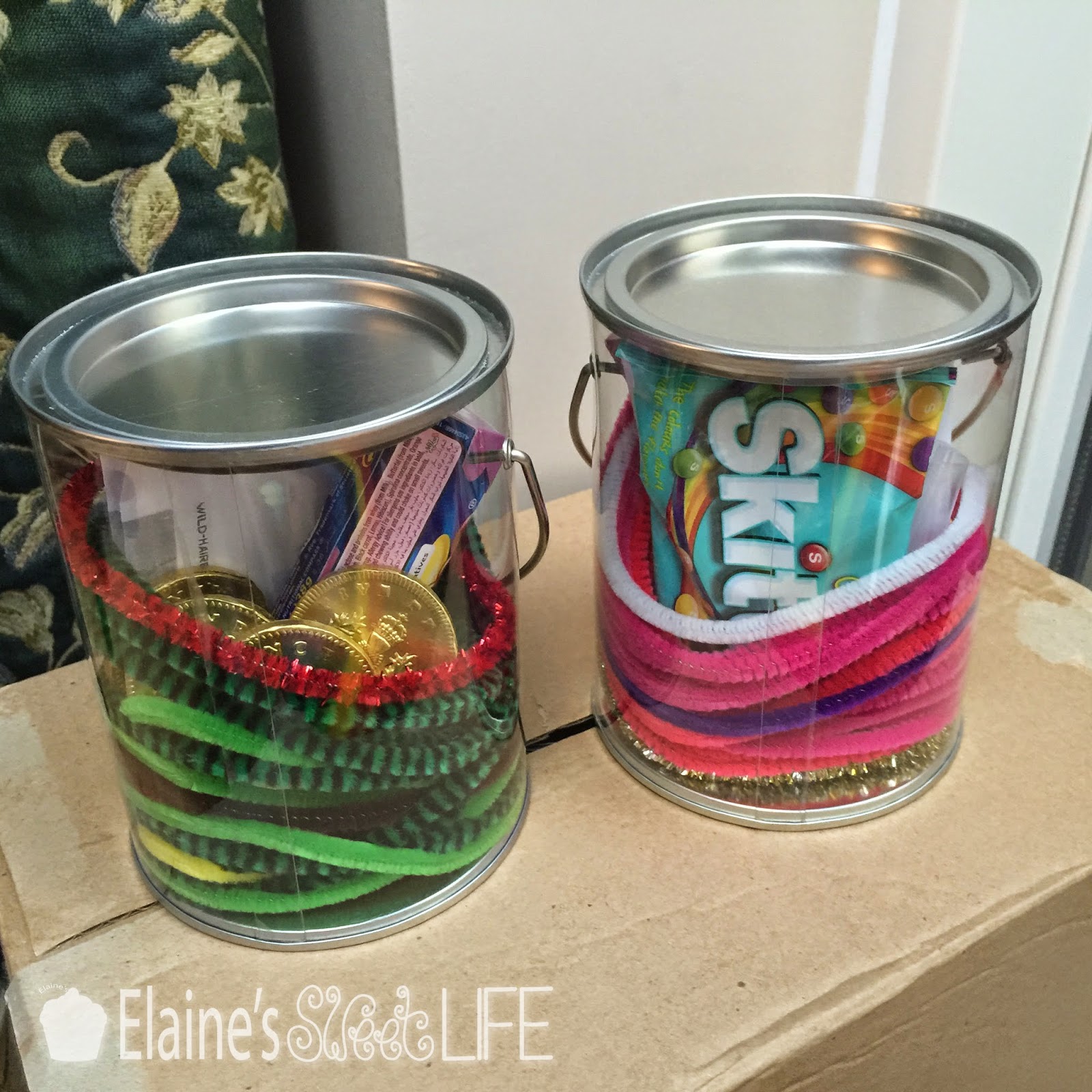 You can certainly tell that there is a party going on in there! 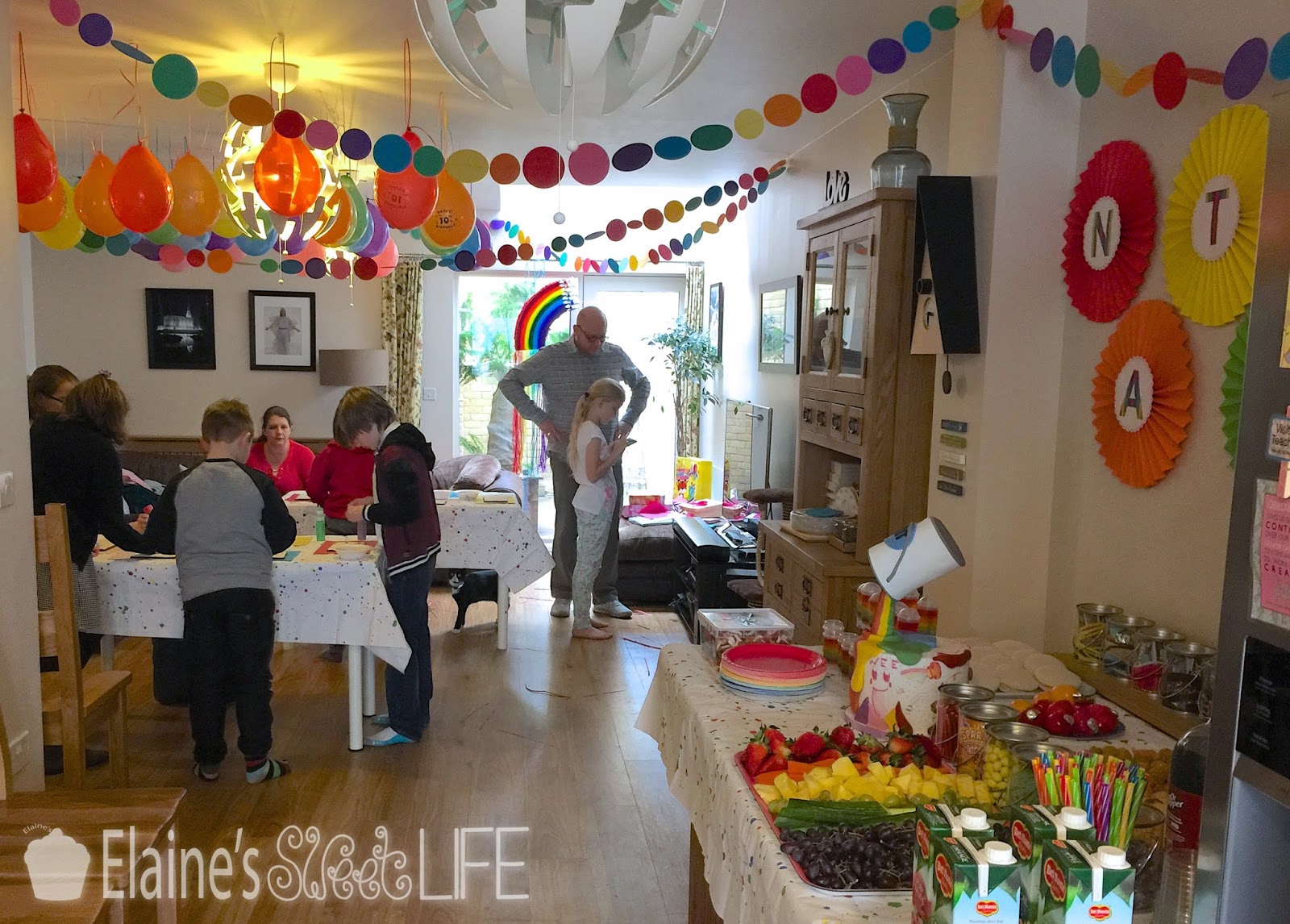 Once the party got going, we had plenty of fun activities and games to keep the kids busy. We started off with some 'cookie canvas' decorating. Each child got a large royal icing covered chocolate sugar cookie to decorate, using edible markers, rainbow coloured royal icing and various sprinkles. They made some really beautiful works of art! 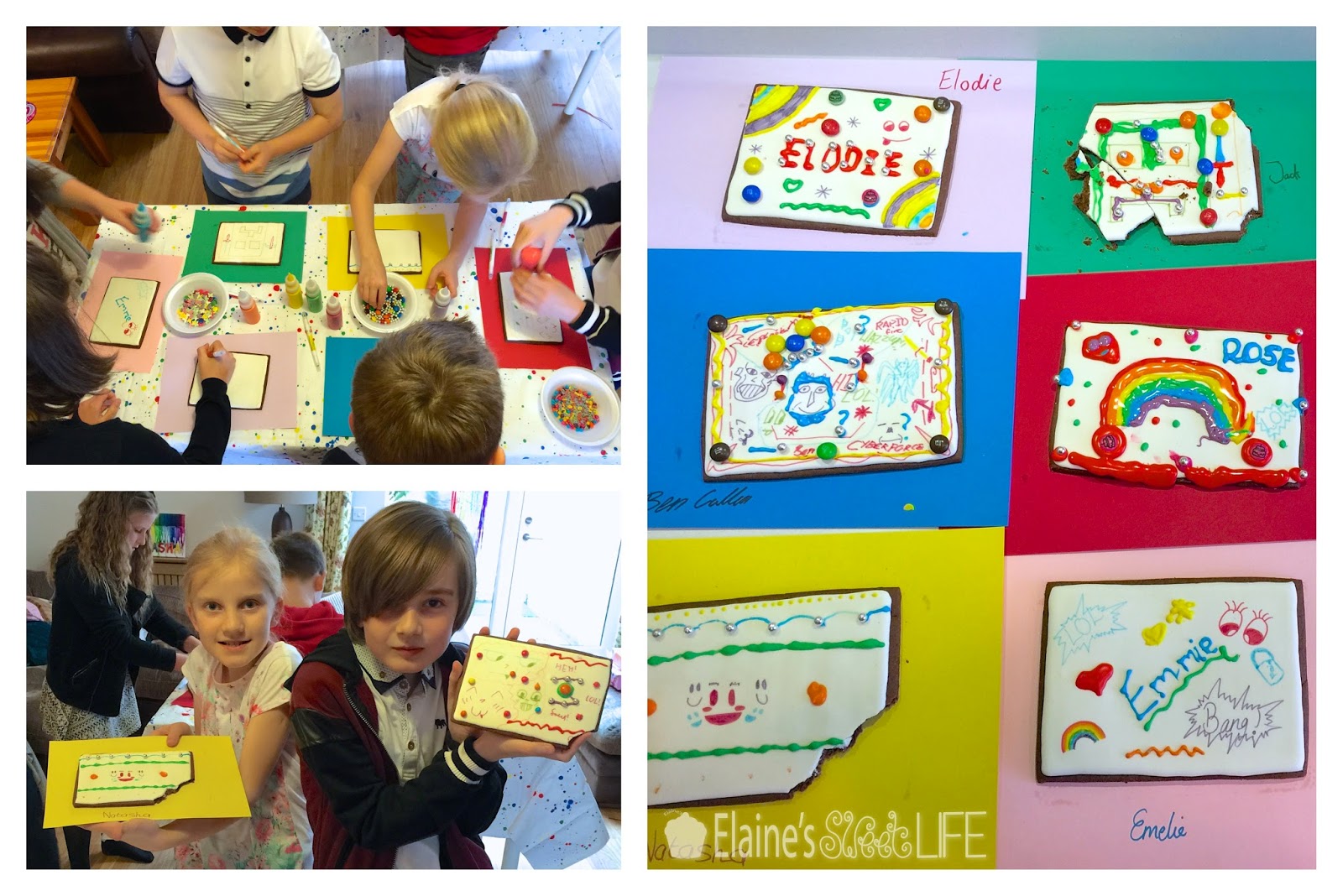 Next up, we played a series of team games.
First, each team had to work together to see who could build the tallest marshmallow tower, using toothpicks (dyed rainbow colours, of course) and marshmallows, 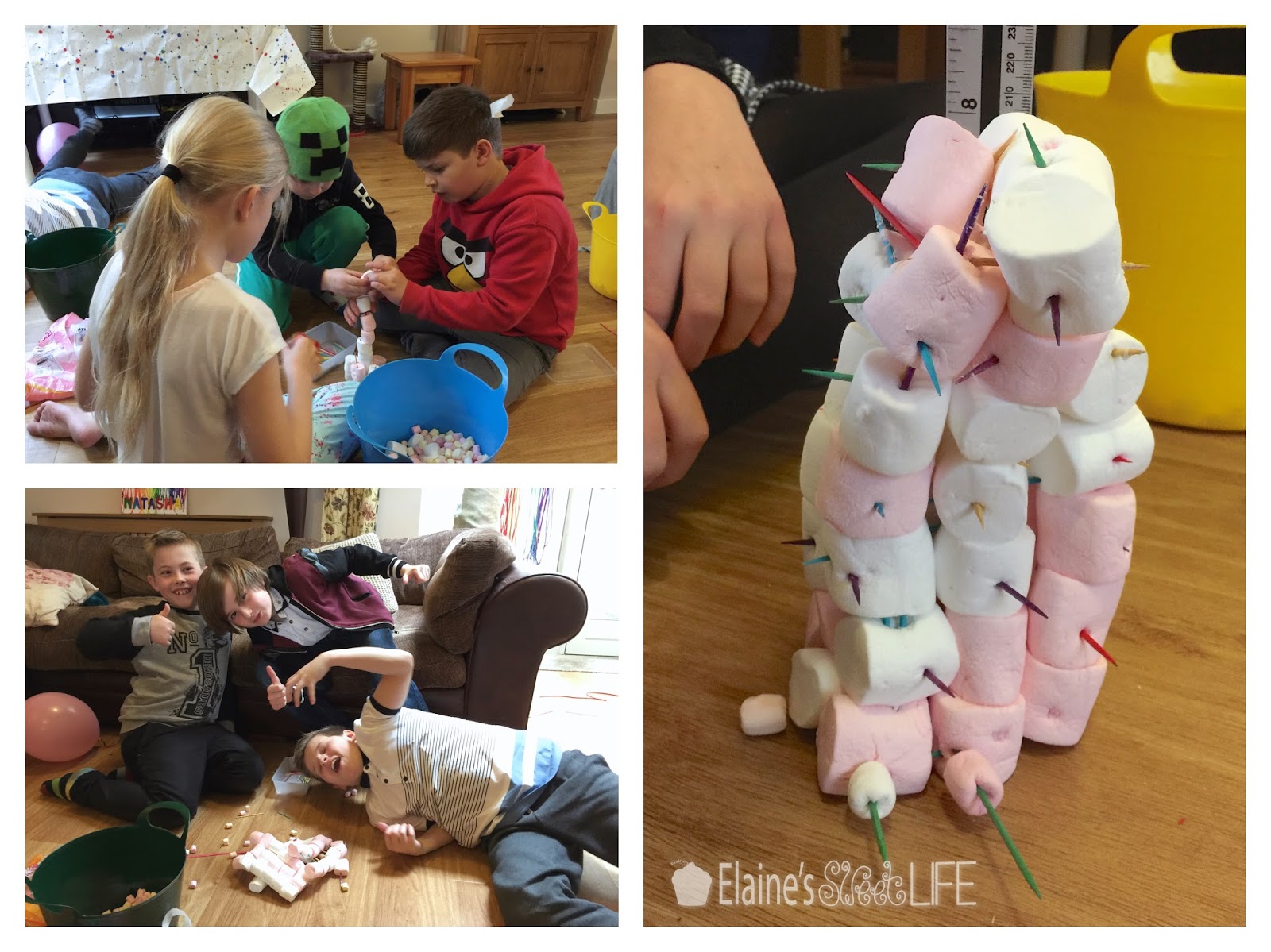 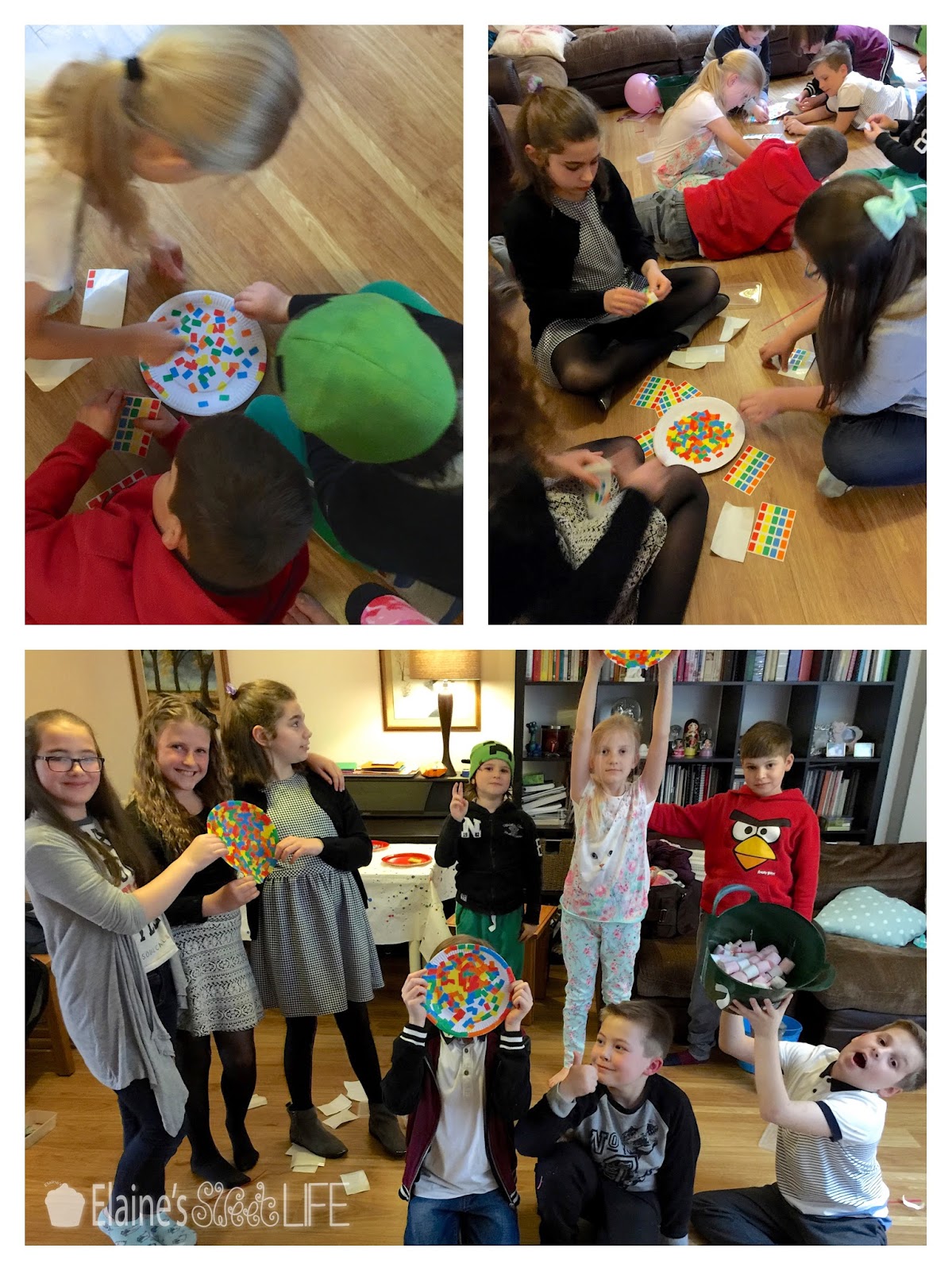 The third team game was a drawing game. We had prepared a stack of cards for each team, with the names of objects on them, like Lion, Car, Octopus, Surfboard, etc. Each member of the team had to draw a card and look at it, but not let anyone else know what their object is. They then had to start drawing that object. After 15 seconds the clock stopped, and they had to pass their drawing to their team mate on their left (receiving one from the right at the same time). The clock started again and they had to continue drawing the picture now in front of them (but of course they don't know what it is supposed to be - hopefully the previous player left enough clues in what the drew), again with a 15 second time limit. This continued until the drawing once again found itself in front of it's original player. A point is awarded for every drawing that resembles what is was meant to be. As you can see, there were some very humorous results! 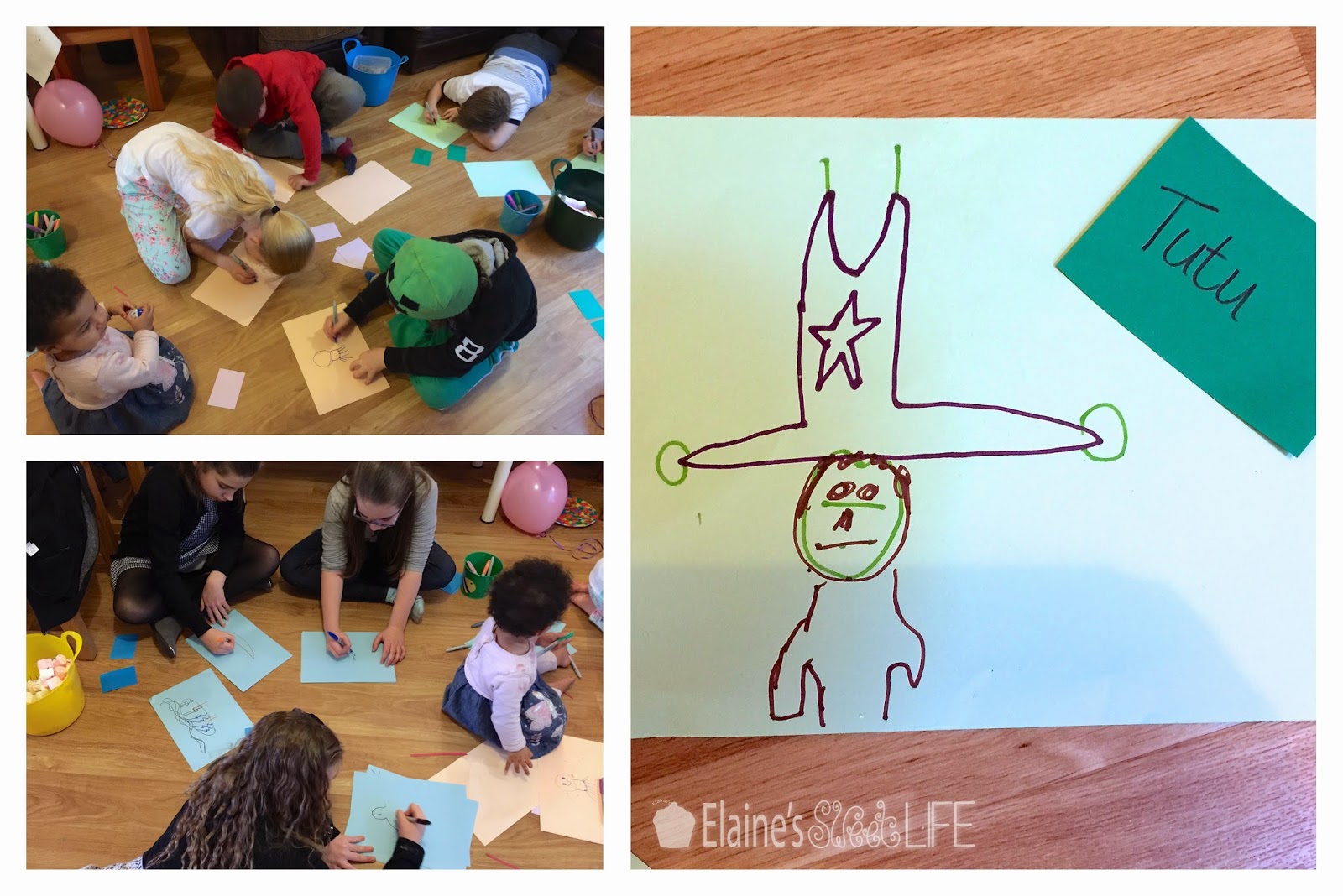 The "Marshmallow Girls" won the team games and each received a medal. 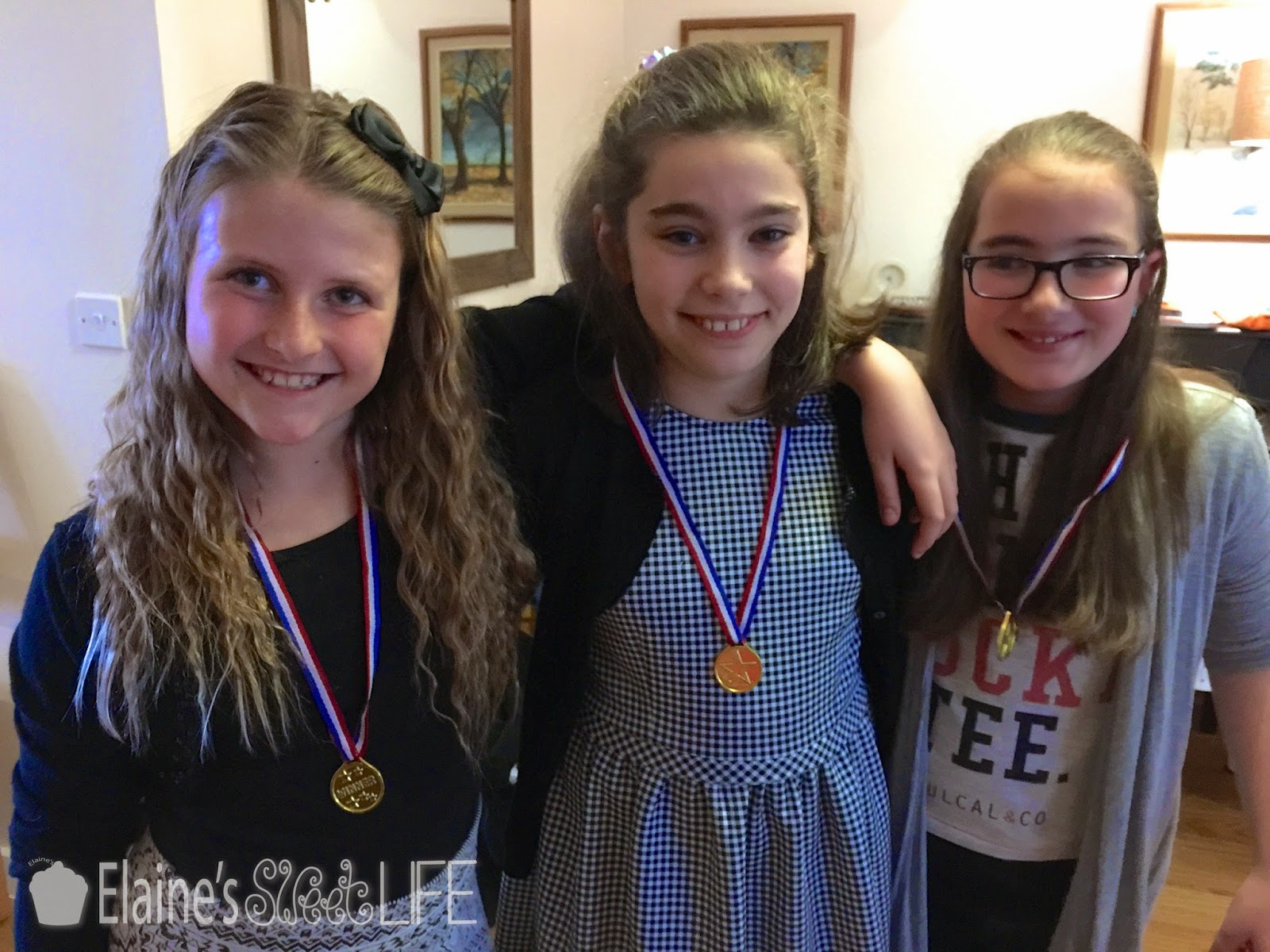 Then it was time to sing HAPPY BIRTHDAY! 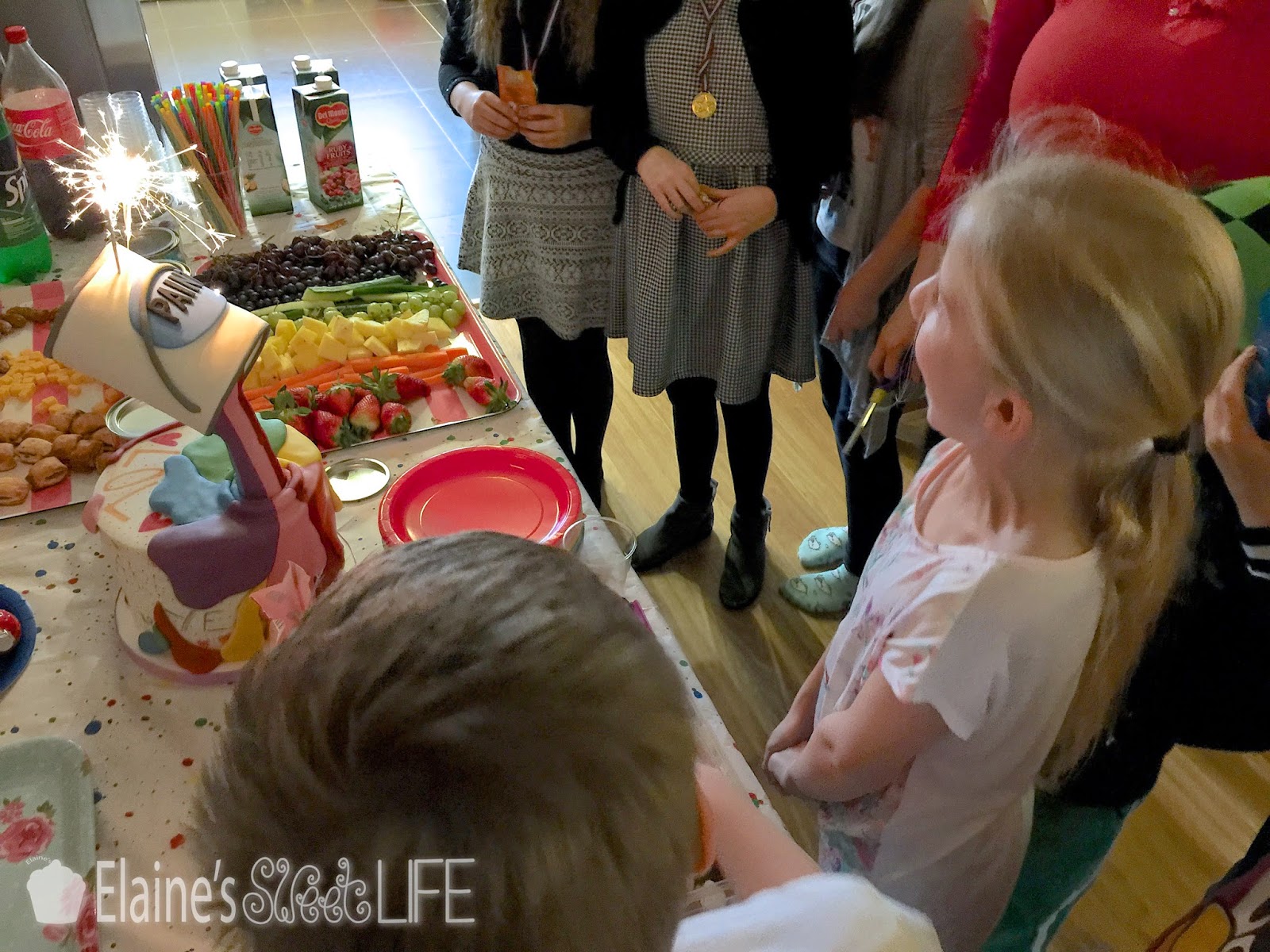 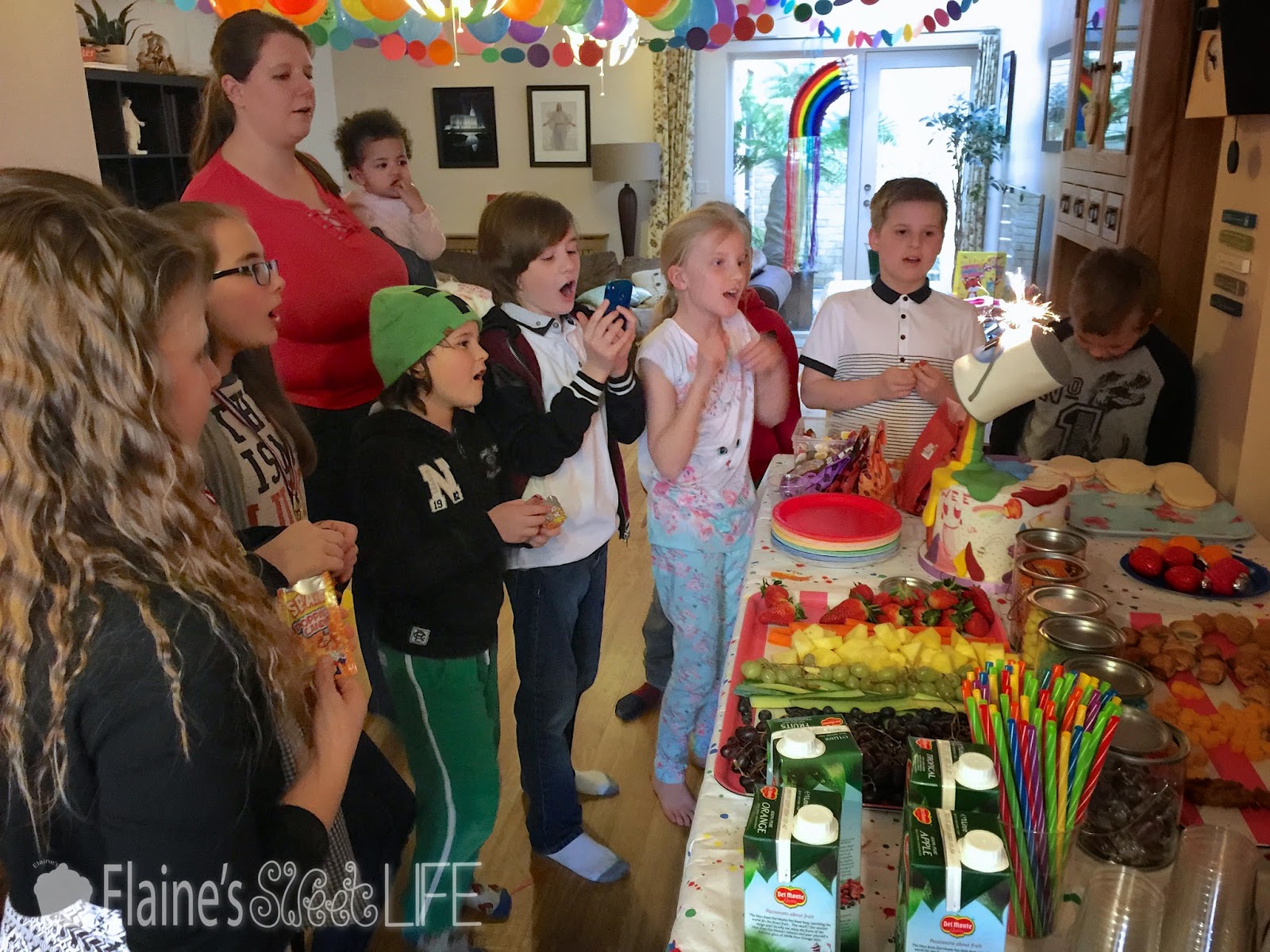 Followed by pulling the piñata ribbons - the birthday girl managed to choose the winning ribbon! 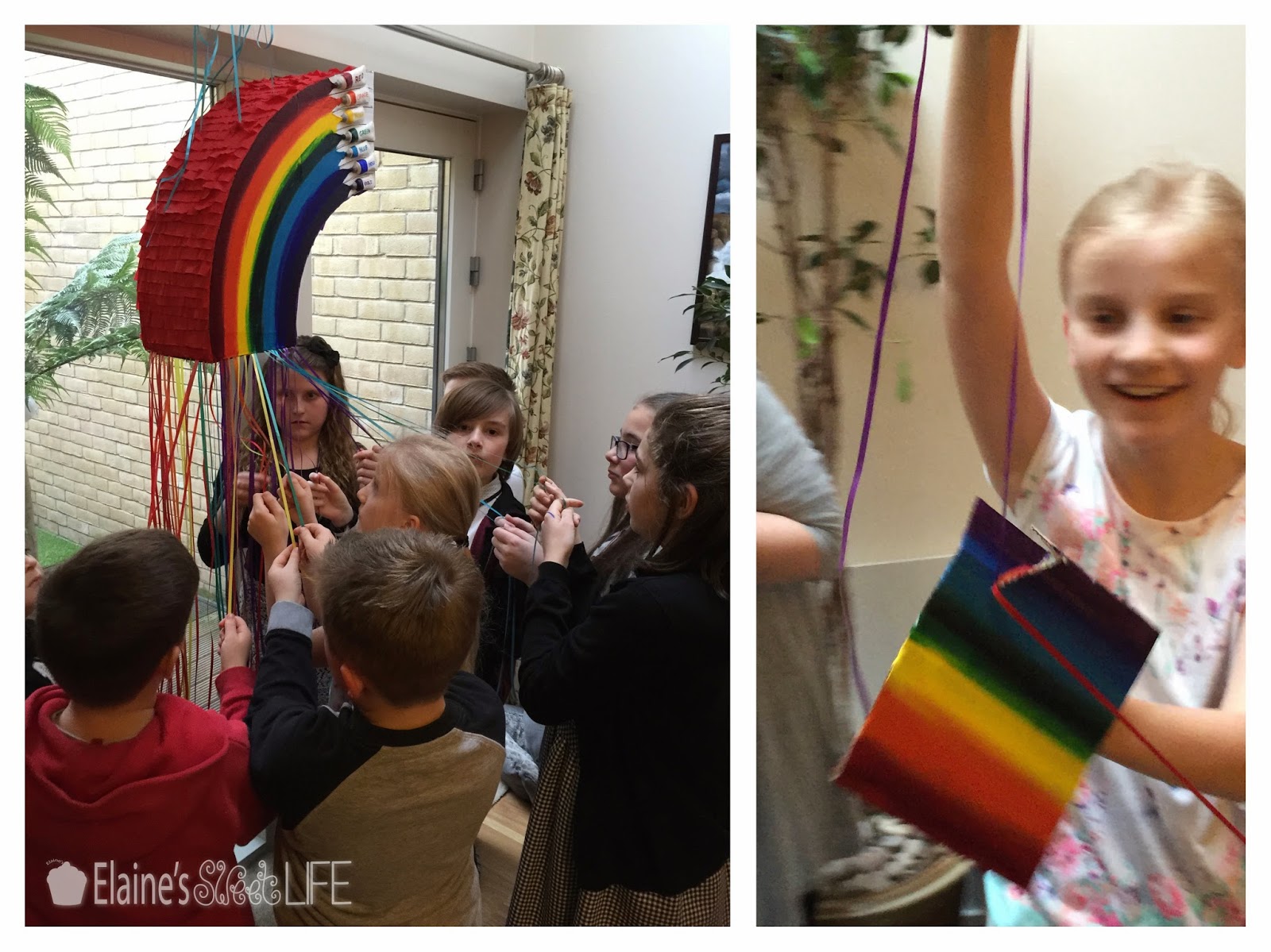 We concluded the party with 2 more activities. Sand Art, made using salt coloured with chalk (I crushed the chalk, then blended it into the slat in my MagiMix). 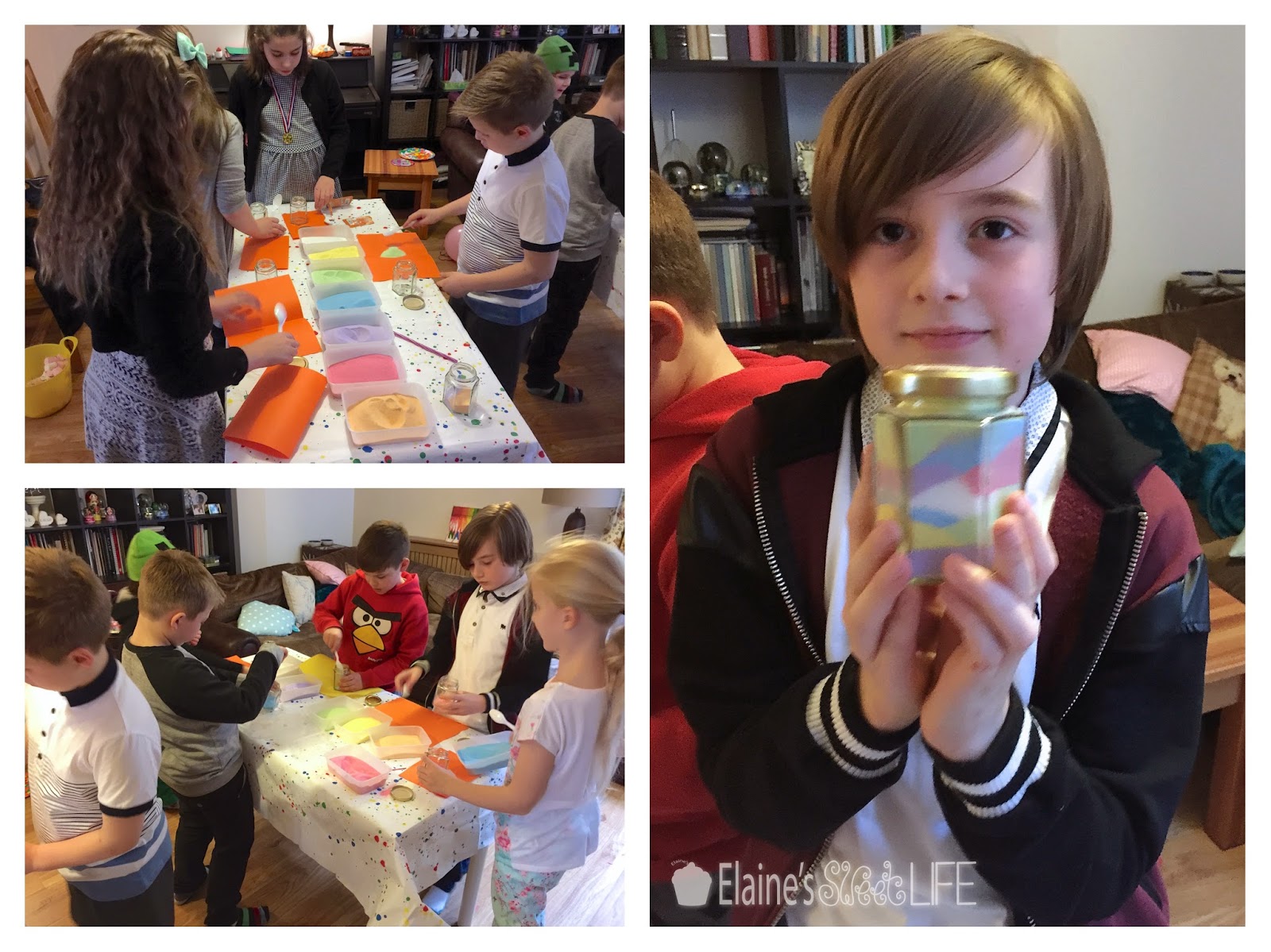 And canvas painting - each child was given a small canvas, with there name on it, to paint. 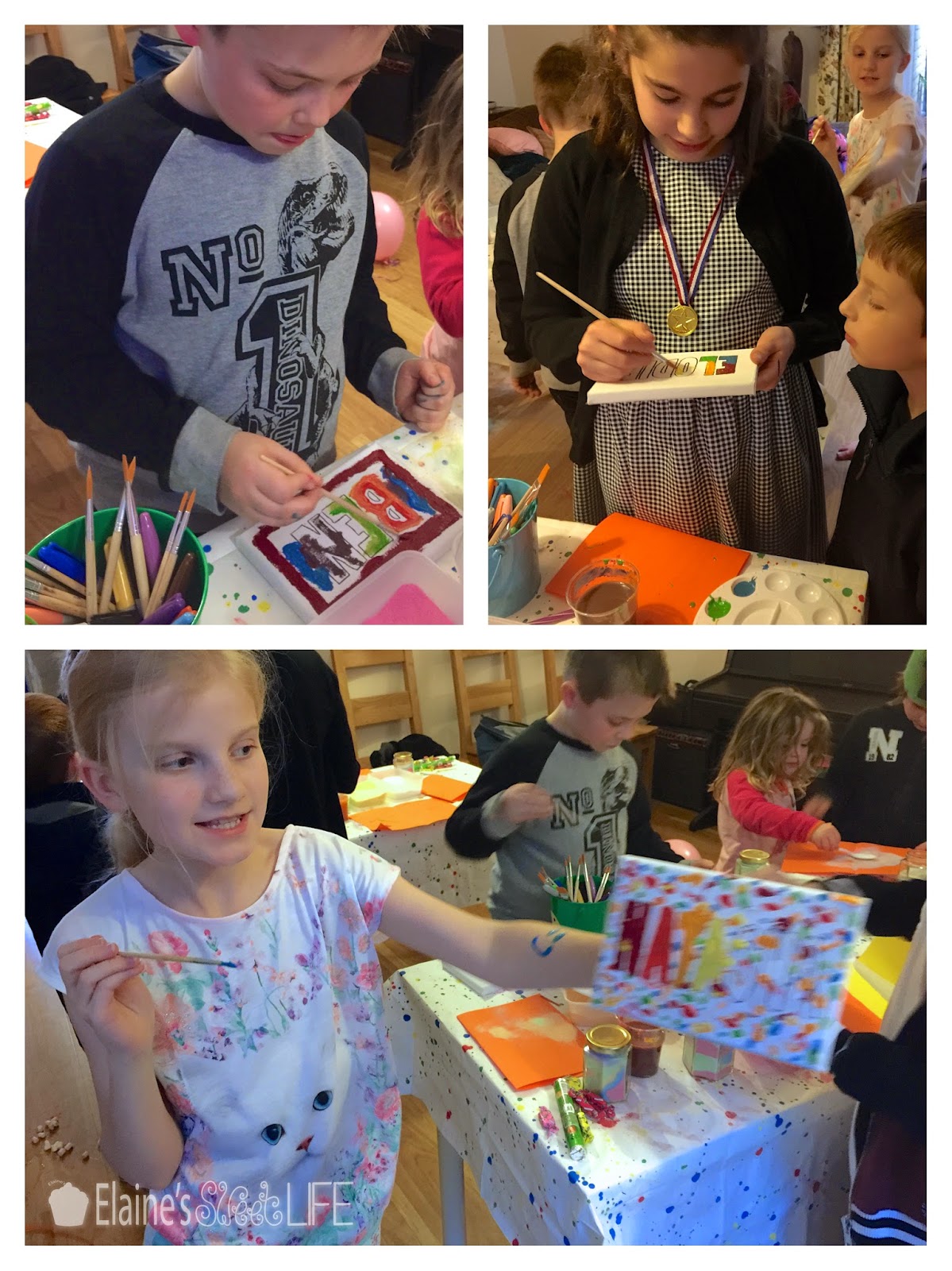 It was a very successful party, the kids had a lot of fun, and were kept busy every moment. 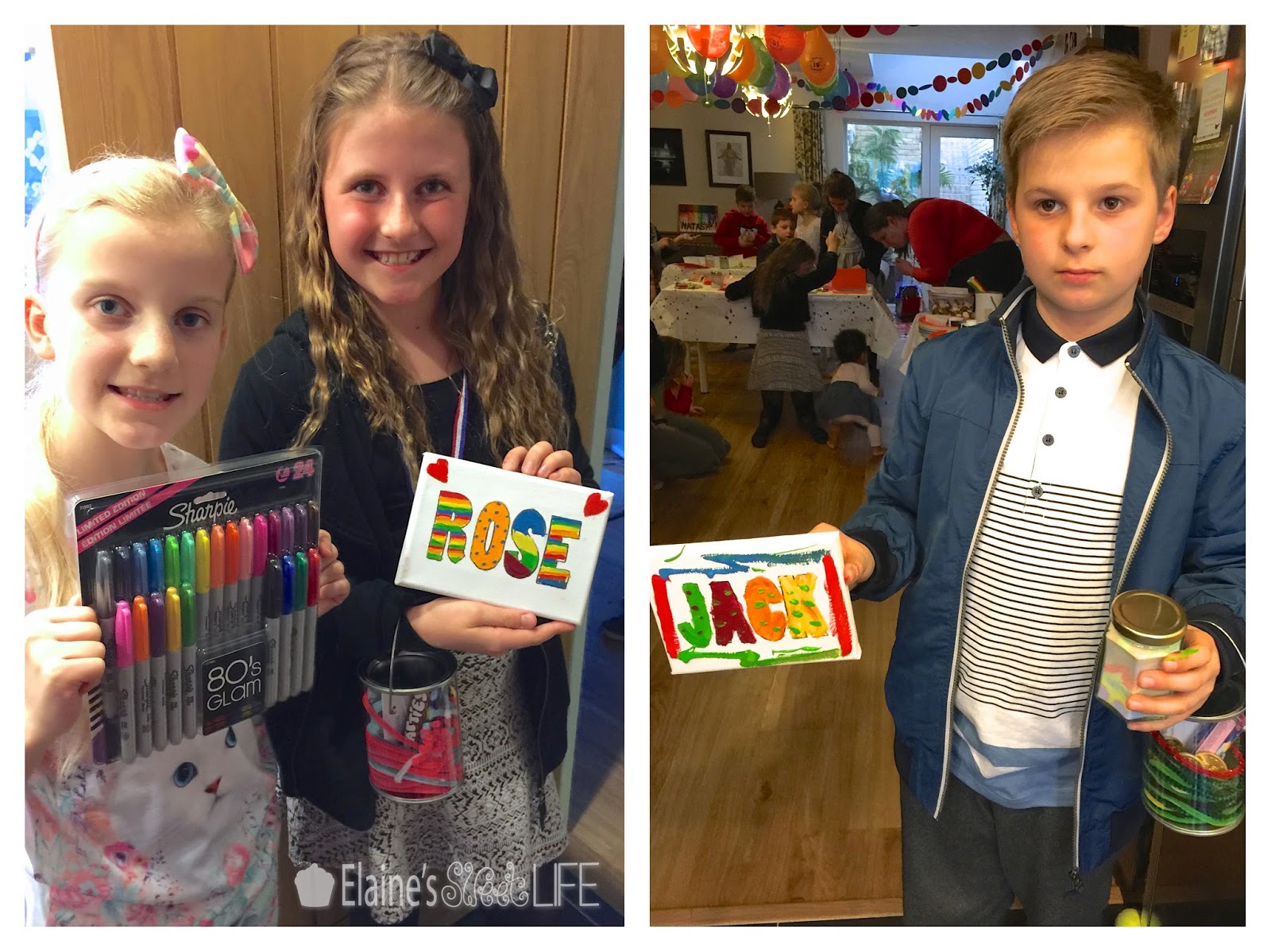 Thank you to Claudette, who sacrificed her whole day to help with both setting up and running the party as well as cleaning up afterwards. You are the best!