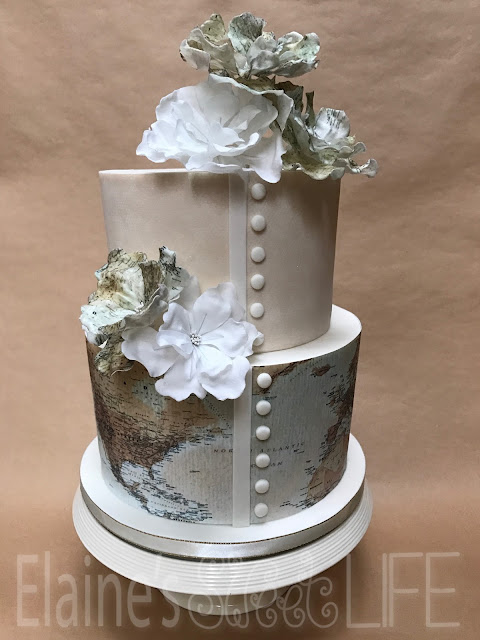 This weekend I put together one of my most ambitious parties yet, with the collaboration of my most awesome partner-in-crime, Claudette. This was a Bridal Shower for Alyssa, the lovely daughter of our other bestie, Lisa. Alyssa will be getting married in America, and then living there afterward, so this was our chance to celebrate her upcoming nuptials with her, and we wanted to do it in style!

Since Alyssa would be relocating we though a travel theme would work really well, and it all just snowballed from there.
First I created the invitation: 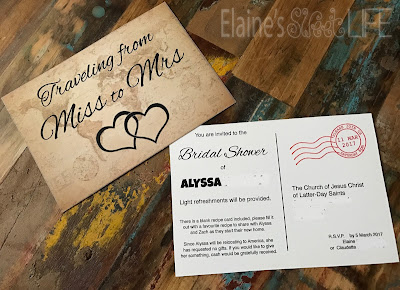 The map with the wording "Travelling from Miss to Mrs" was the first step, then when deciding whether to make the invitation a folded card or to make it postcard style, we realised it would be really cool to make it not only postcard style, but to look like an actual postcard!

Next was to design the cake. I would really have loved to make Alyssa's wedding cake, but since that can't happen, I decided to make her a formal cake for the shower. I knew I wanted to have an element of lace (to reflect a wedding dress), I just had to figure out how to fit the travel theme/map into the cake design too. I remembered that a friend of mine has an edible printer, and a design formed in my head (she printed both icing sheets for the bottom tier and wafer paper sheets for the flowers).
The cake turned out almost exactly as I had imagined it! 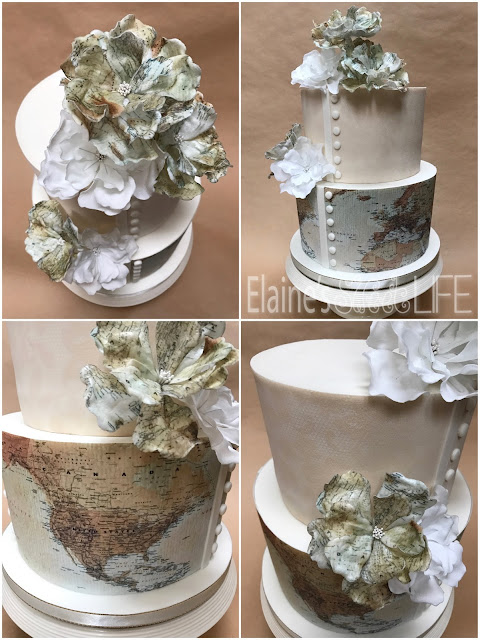 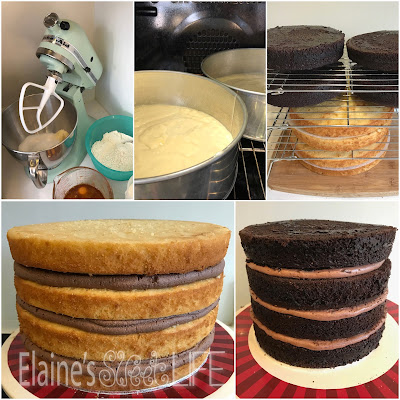 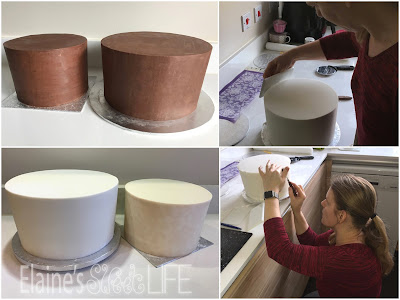 I used the wrap technique to cover both of the cakes with the fondant. I find that when covering such tall cakes, this gives much sharper corners and more uniform sides, which were necessary both for sticking the maps onto the bottom tier and stencilling the top tier (and both techniques would easily cover the join down the side).

The stencil I used on the top tier is a beautiful lace mesh stencil I purchased from Evil Cake Genius. I attached the stencil to the cake using straight pins, then used a spatula to apply the coloured royal icing and a plastic scraper to scrape the excess off again. I had to add quite a lot of white food colouring to the royal icing to make it opaque enough for the detail of the design to be seen (a bit of trial and error before touching the actual cake). It was brilliantly easy to use and the results look incredible - so detailed! Once stencilled I added just a touch of edible glitter for some sparkle. 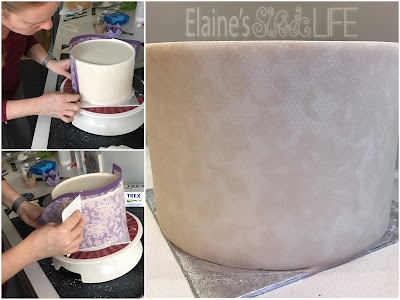 Next up I need to make the wafer paper flowers. I used this tutorial by Sharon Wee Creations. Again, there was a bit of trial and error here. I had completely forgotten to buy piping gel, so I decided to use a bit of tylose powder mixed with water. This did work very well, but I had to vein the petals while the tylose glue was still moist, or the wafer paper was susceptible to cracking quite badly. My petals also seemed to be a bit stiffer than hers in the final product and more curled (no idea if either was due to the use of tylose glue or not), though also very tough (much stronger than the original wafer paper), which is a good thing! I also found that I could not spray water (with the airbrush) onto the printed side of the wafer paper (it changes colour), so for the printed flowers I used one layer of white wafer paper and one printed, and glued them together with the tylose glue, then before veining I would spray the back (white side) of the petal, leave it for a few second for the water to seep in, then spray the back a second time and press he petal in the veiner. I cut all the petals by hand, making each one just a little bit different. 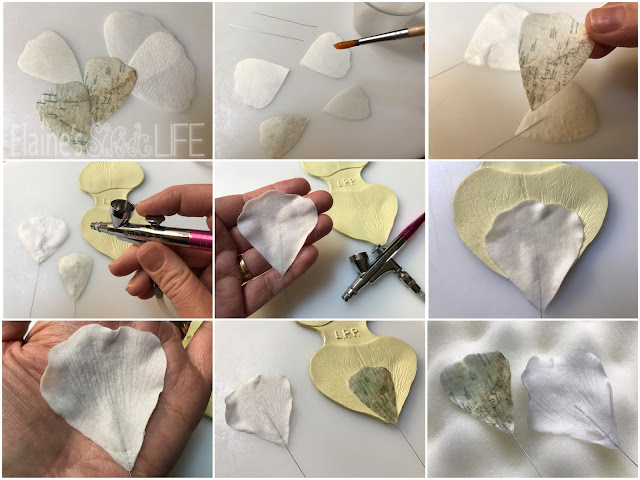 Next we focused our attention on the party itself. Maps would be needed for hall decoration, as well as flags, suitcases (especially vintage ones) and, of course, what party would be complete without fairy lights? 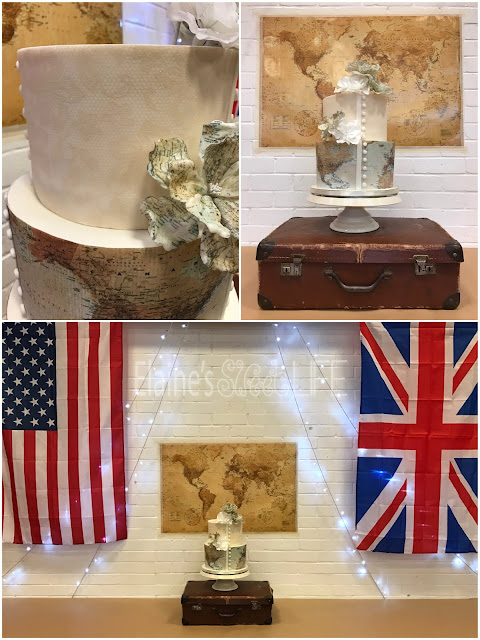 Since we wanted this to be a classy event, we decided to serve canapés. I made square devilled eggs and chocolate spoons with raspberry mousse. Claudette made fruit skewers, pastry pinwheels and 2 different ritz cracker canapés - chicken with cream cheese, chives and balsamic vinaigrette (which she was told by one guest were the best thing he had ever eaten); and cherry tomatoes with mozzarella and pesto. 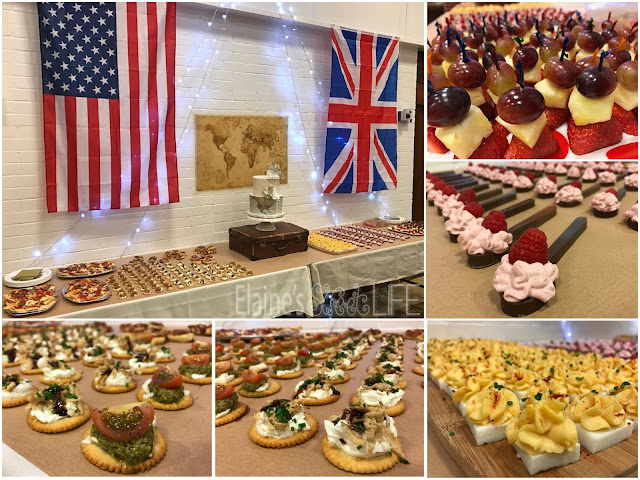 The biggest trick up our sleeves, however, was out "Make Your Own Mocktail Bar!" We had ingredients, equipment and recipes for three different Mocktails that guest's could have a go at making themselves - Virgin Strawberry Daiquiri, Virgin Pina Colada and Virgin Mojito. As well as some jugs of Virgin Pimms. This was so much fun, and a delicious treat. A few guests even had a go at creating their own mocktails. 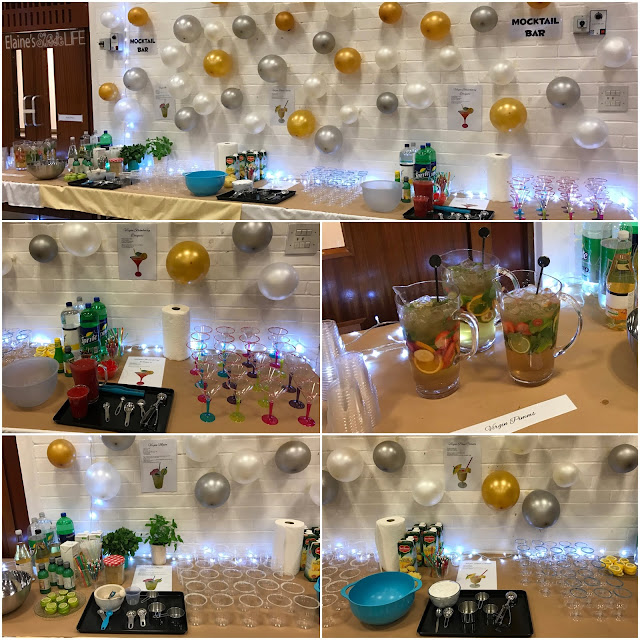 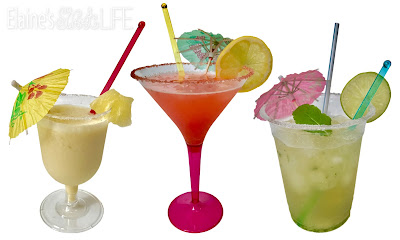 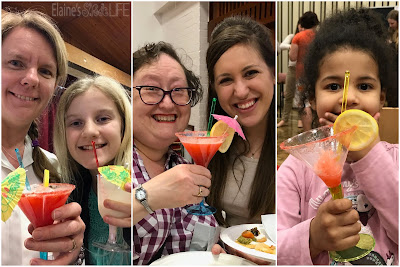 Finally, no Bridal Shower would be complete without some games / activities.

We started the party off with a game we called "What Did Zach Say?" We prepared 12 questions in advance that we got the groom to answer on video. We then asked Alyssa each question and she had to try and guess how Zach will have answered the question. Neither our bride nor her mother knew we had collaborated with the groom, so this was an extra special surprise for them. She did very well indeed, only having to pop a few sticks of gum into her mouth (when she got a question wrong). It seems the groom deliberately answered some of the questions with the aim of throwing the bride off. So funny!

There was a station where guests could create "Date Night Idea" sticks, writing unique (and some naughty ;) date ideas onto wooden sticks and decoration them with washing tape. Along with the party invitations, we gave out blank recipe cards, so had a box for those to be put into. 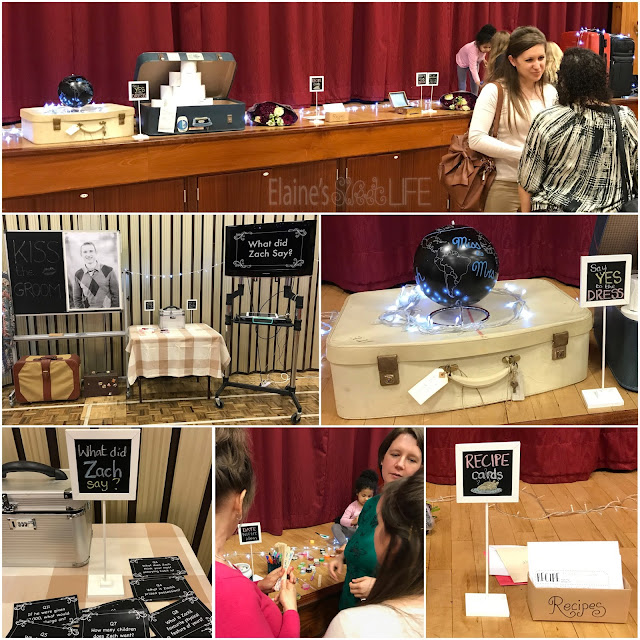 The favourite game of the evening had to have been "Kiss the Groom," it sure produced a LOT of giggling!!
I made the stamps, used for 'kissing' the groom, myself. Three of us each kissed a plastic rubber/eraser with dark lipstick and I carved them out with a craft knife, then glued it to a wooden block to make for easier stamping. 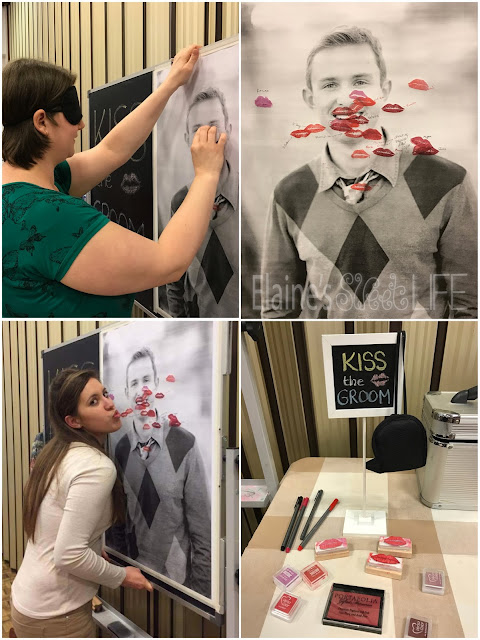 We also played "Don't Say BRIDE or WEDDING", each of us wearing a plastic jewel ring and trying our best not to say either of those words. I am hopeless at that game, and lost my ring within the first few minute of the party! The winner had quite the collection of rings on her fingers by the end of the evening. 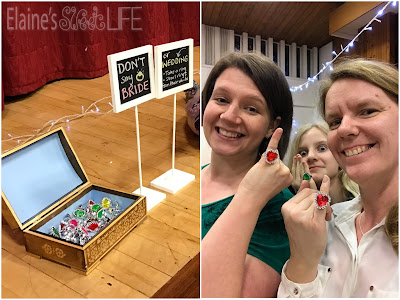 To finish the evenings activities off (before cutting the cake), we played "Say Yes to the Dress!"
We split into 5 groups (and spectators) and had three toilet rolls and a glue stick with which to create a toilet paper wedding dress. This is actually the first time I've played this game, and it was hilarious!! The problem with cheap toilet paper - it tears really easily! The dresses produced, however, were very creative and quite impressive! One even had gummy rings stuck all over it (I won't ask how they got them to stick Lol) and we had a little flower girl too. 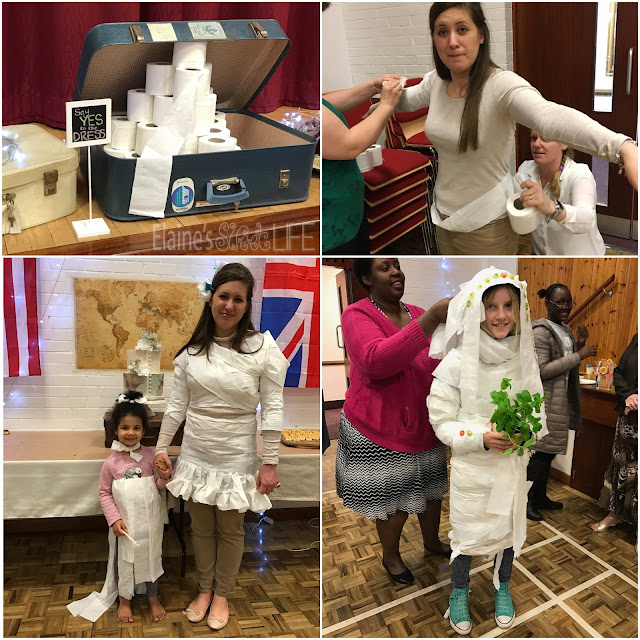 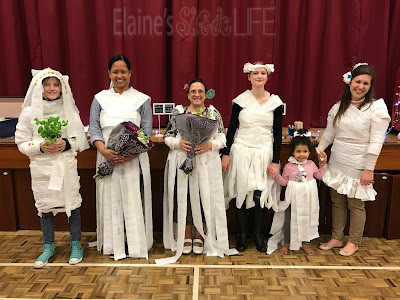 It was a wonderful evening and I hope it was very memorable for our beautiful bride and her gorgeous Mum. I love you guys and wish you all the best for your future with Zach, Alyssa. We will really miss you xx 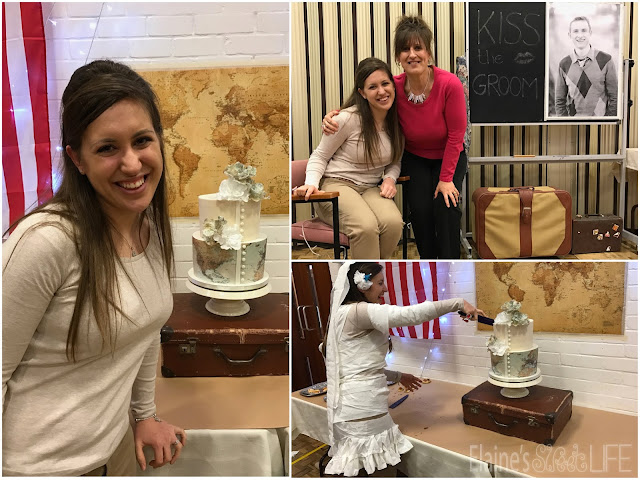