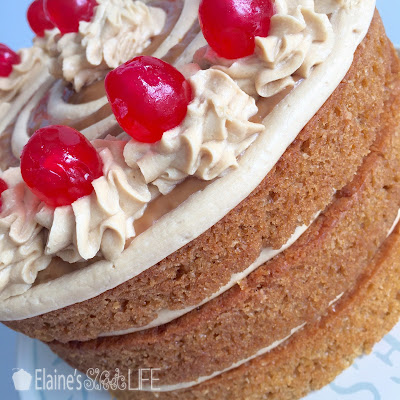 A couple of years ago a friend asked me to make a coffee cake. I don't drink/eat coffee and I don't particularly like nuts in cake, but the idea of a coffee cake appealed to me, so I came up with this recipe using a hot chicory and barley drink called Caro as a substitute for the coffee. Then I pared it with caramel because... well, just because! 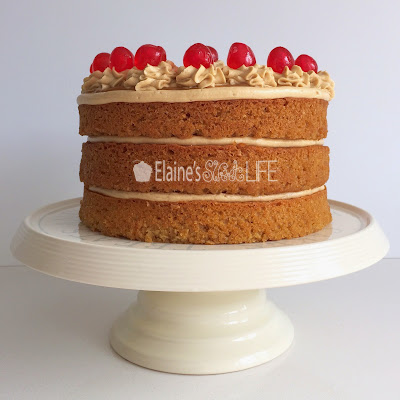 The final result is my Caro Caramel Cake, delicious and sickly sweet (if you eat too much), it has become very popular among my friends. Yesterday a friend said to me: "You know, I don't normally like that kind of cake, but that was actually really yummy." Made my day! 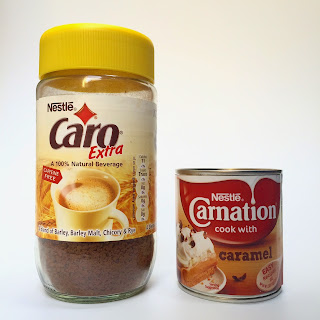 This recipe can be made with Caro or any other chicory based hot drink. Caramel can be substituted with Dulce De Leche or caramel made from condensed milk. 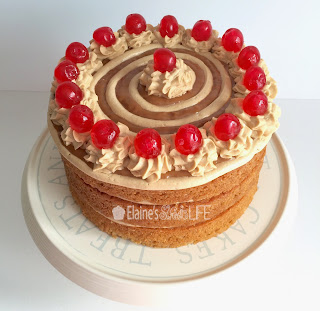 Preheat the oven to 180ºC.
Grease and line three 8in cake tins (I only have 2 tins, so I bake 2 layers, then bake the third afterward).

Beat all the cake ingredients, except the Caro and water, together until smooth. Stir the dissolved Caro into the batter. Divide the mixture evenly between the three prepared tins (reserve one third if you only have 2 tins), spread it out evenly in the tin and drop each tin firmly on the counter to settle the batter.

Bake for 25–30 minutes until a skewer inserted comes out clean and the sponge has pulled away from the sides of the tin.
Cool sponges in the tins for about 10 minutes, then remove from the tins and allow to cool completely on a cooling rack.

To make the icing, beat the butter and icing sugar together until smooth. Beat in the vanilla and dissolved Caro. Fill a large piping bag with the icing and cut off the tip so that you have a 1/2 inch opening.

Fill a small piping bag with the caramel, cut off the tip to a 1/4 inch opening. 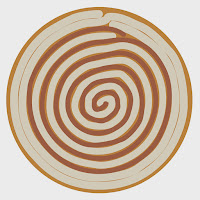 Place one sponge on your cake stand/plate, pipe on a double ring of icing about 1/4 inch from the edge of the sponge, then pipe a loose spiral of icing inside that ring, finishing in the centre of the sponge. Pipe caramel into the gap between the loops of the spiral - resulting in a double spiral of icing and caramel.
Place the second sponge on top and repeat the icing-caramel filling.
Place the third sponge on top, then pipe on a single ring of icing, close to the edge of the sponge. Now fill in the top of the cake with an icing-caramel spiral. Finish with some swirls of icing topped with glace cherries.