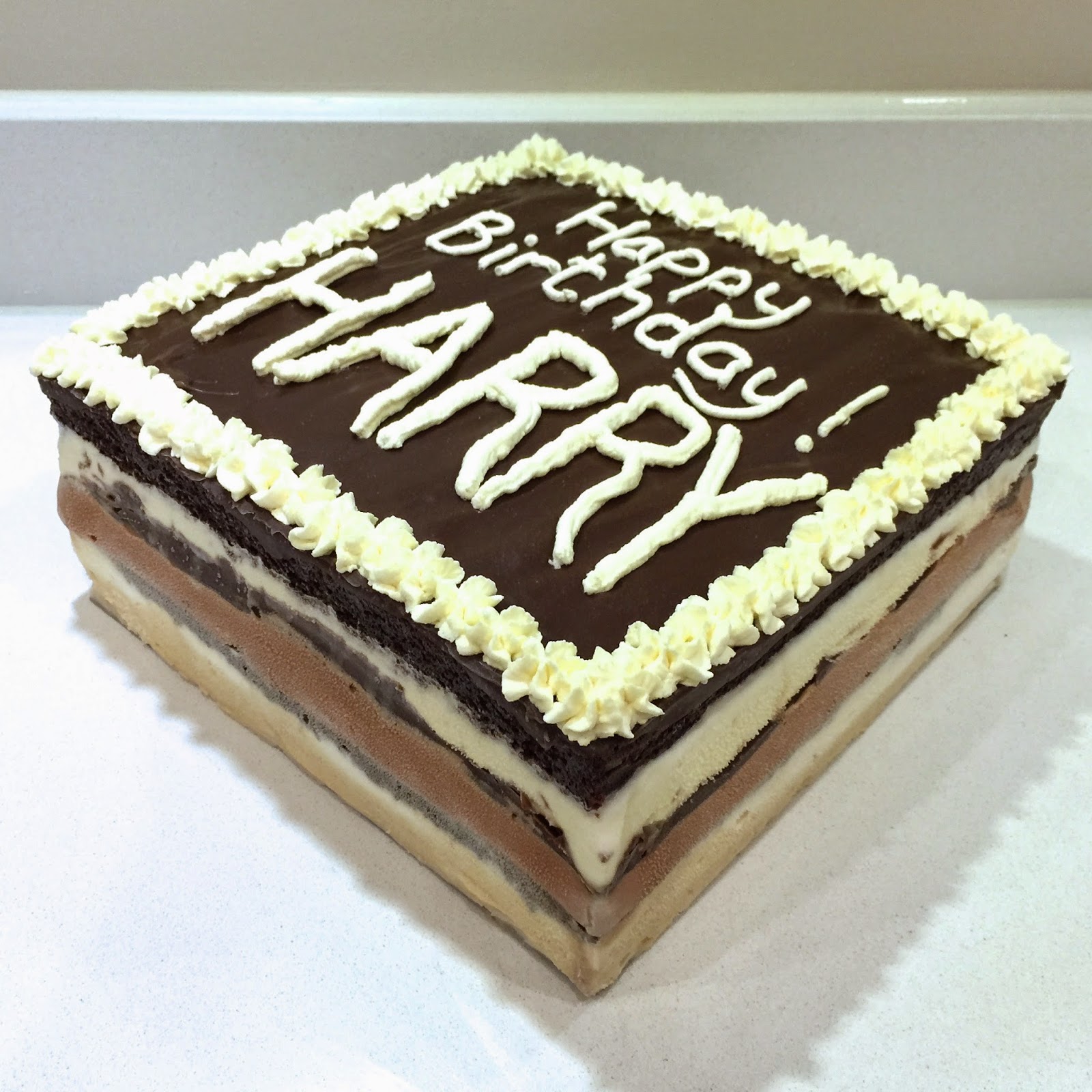 A friend asked me to bake a surprise cake for her husband's birthday - a chocolate ice cream cake (a combination of two of his favourite sweets). Harry's birthday was on the day of our Roadshow dress rehearsal, and as they are new in our area, and no one knew it was his birthday, she though it would be fun to have a little surprise party for him before we began our rehearsal. Well, you know what they say about best laid plans... 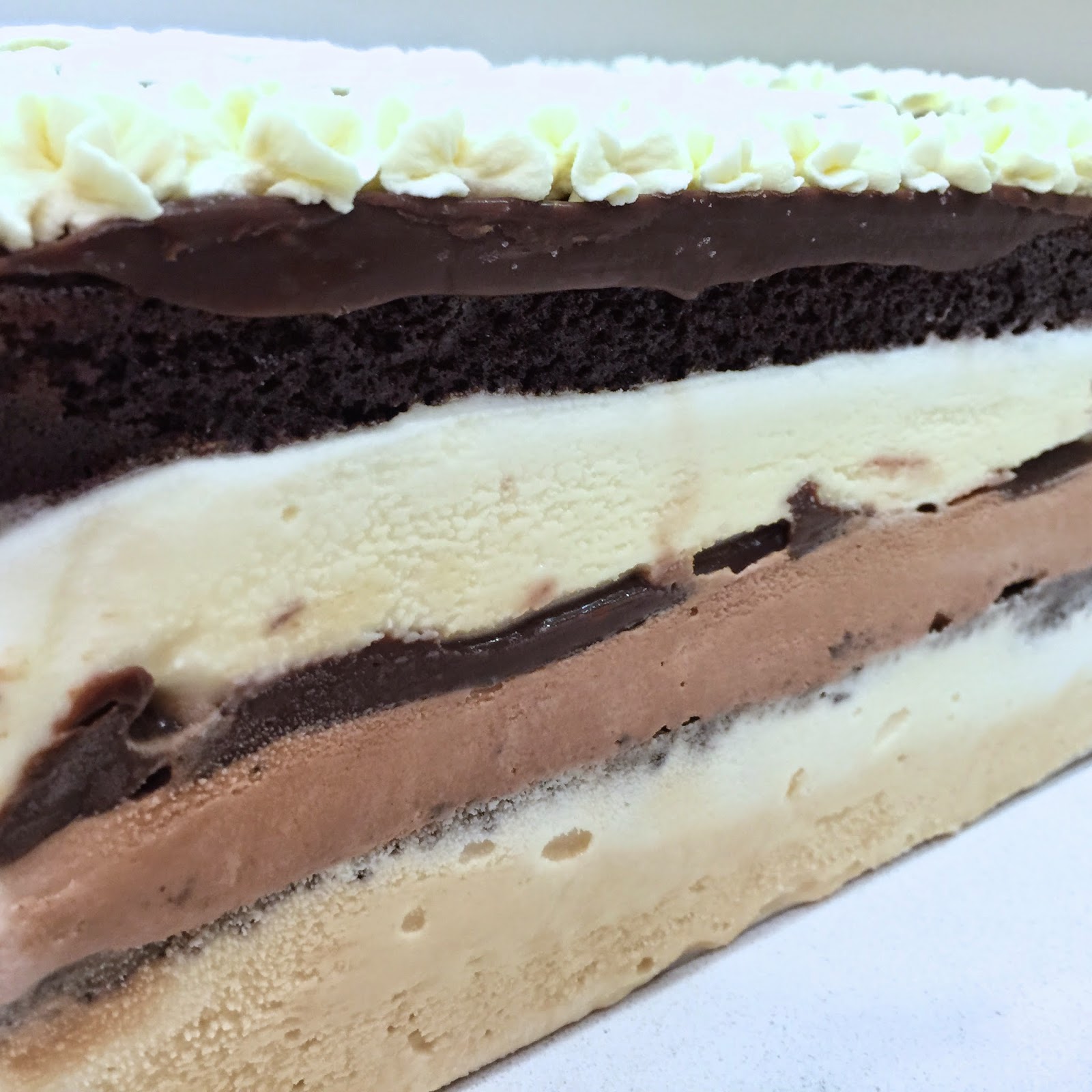 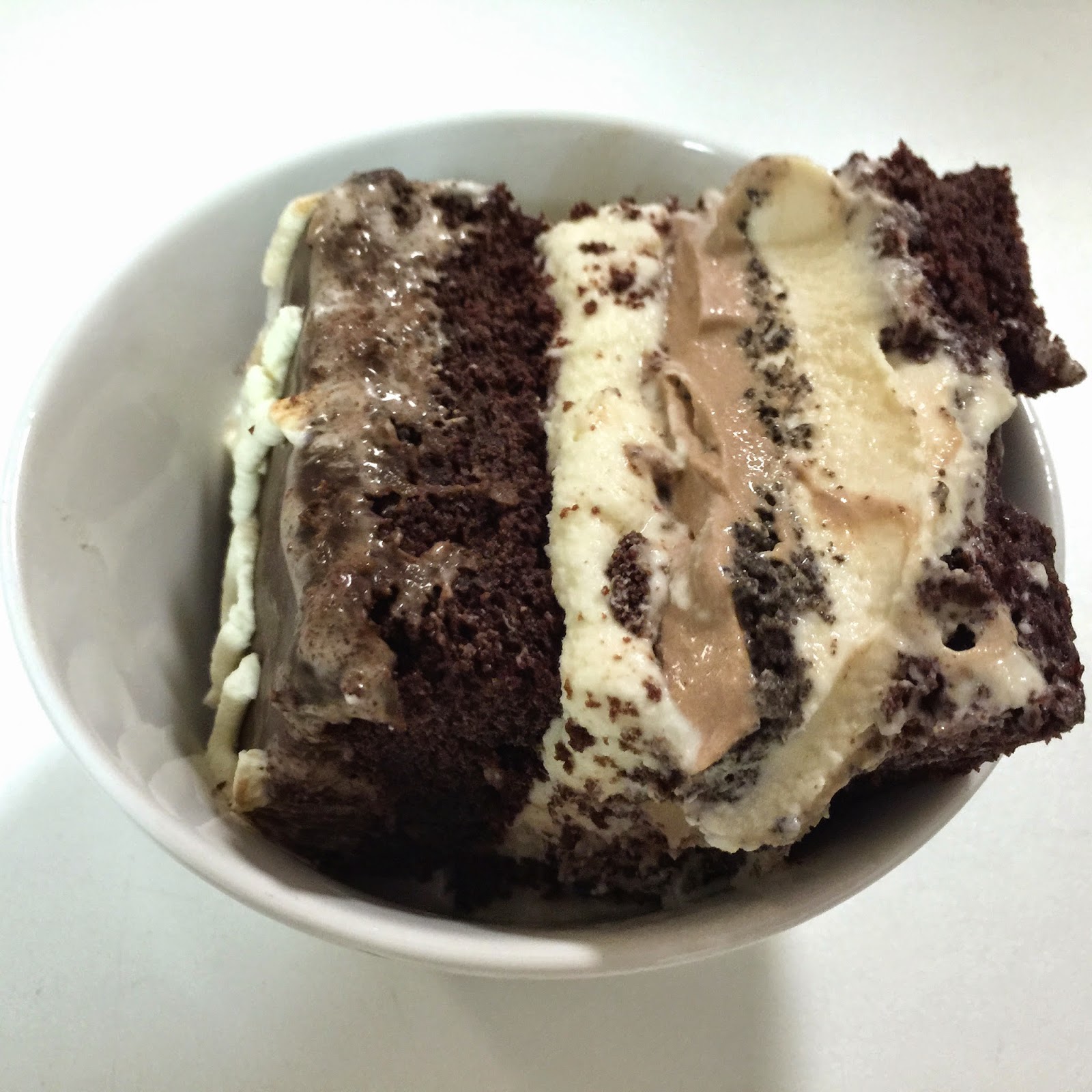 Unfortunately, Harry never got his surprise. My friend was involved in a car accident on the way home to fetch Harry and bring him to the rehearsal (she was thankfully uninjured, though her car wasn't as lucky!) Because the cake was ice cream and the freezer at the church far too small to accommodate it, we ended up having to eat it without them!! But not before making a video of us all singing to him beside it. We did manage to get a couple of pieces into the freezer though, so when they finally made it to us, after a very long and traumatic evening, they did get to enjoy it. I'm not sure what my friend was more upset about: spoiling her husbands surprise or the fact she was in an accident Lol. All well that ends well, just so glad that she came to no harm.

Combine all ingredients except for Boiling Water in a bowl. Mix just until smooth.

Bake for about 1 hour 15 mins until a skewer inserted comes out clean, and the cake has pulled away slightly from the sides of the tin. The cake will be quite domed when it comes out the oven, but will sink back until it is almost flat as it cools.

When completely cool, divide cake in half horizontally to make 2 layers.

Meanwhile, crush the Oreos in a food processor, or by bashing with a rolling pin while in a sturdy plastic bag. Mix about half of the churned ice cream into the crushed Oreos.

Spread the rest of the ice-cream onto the cake layer in the cake tin. Carefully spread the Oreo mixture on top of the ice cream layer.

Place in the freezer for at least an hour.

Heat 100g of the milk to below boiling and dissolve the cocoa powder into it.

Add the rest of the milk, cream, sugar and vanilla and mix well. Pour into prepared ice cream maker and churn until it reaches soft serve consistency.

Spread the chocolate ice-cream on top of the Oreo layer in the cake tin. Return to the freezer for another hour.

Spread two thirds of the cooled chocolate fudge ganache on top of the chocolate ice cream in the cake tin. Return to the freezer while you do the next step.

Unwrap the left over chocolate cake layer (which is now frozen) and push it down on top of the vanilla ice cream layer in the cake tin.

Place in the freezer for at least an hour.

Ingredients:
1 cup double cream
50g icing sugar
1 1/2 tablespoons meringue powder
1/2 teaspoon vanilla
Method:
Sift icing sugar and meringue powder together.
Add vanilla to cream and beat on medium speed until it begins to thicken. Add sugar mixture to the cream and beat on medium until combined. Beat at high speed until stiff peaks form (be careful not to over beat and turn it into butter).
Using a piping bag, pipe the cream onto the top of the frozen cake however you desire. You can remove the cake from the tin and remove the parchment before piping the cream, or pipe it on while in the tin, and leave it in the tin until just before serving.
Return the cake to the freezer until ready to serve. The finished cake should stay in the freezer for 3-4 hours once complete to ensure it is well set before serving. I recommend to make the cake a day in advance. Left over cake should be returned to the freezer as quickly as possible.
If you would like to make the cake further in advance, complete the cake up to the end of stage 5 and leave the cake in the freezer until firmly set. Remove the cake from the cake tin, leaving parchment in place, and wrap in cling film. Store in freezer until needed (though recommend consuming within 30 days). Add the whipped cream decorations when required.