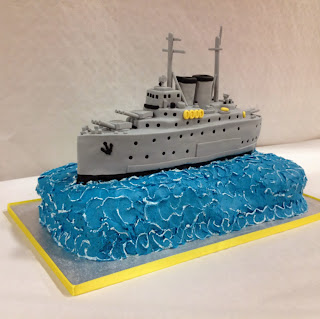 An amazing gentleman from my church turned 90 last week. He has become a good friend to us since we moved into the ward, and a great home teacher! He he is kind and considerate, a perfect example of a true gentleman, he really cares about those around him. The kids also love him, especially since he always has his pockets lined with candies to dish out. We are also 'chapel cleaning duty' partners and twice now he has done the lion's share of the work when I have been unwell (he actually seems to enjoy doing it!)  So this cake was made for him as a surprise, since he had served, most of his life, in the navy. 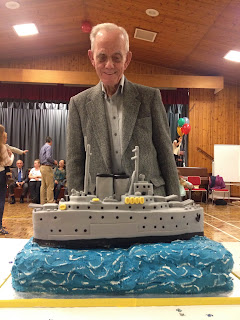 He was delighted to see the cake! He asked me how I knew what the ship should look like, I told him that I modelled it after photos of the HMS Newfoundland (with a good deal of artistic license!). He looked even more surprised and said: "that is the ship I served on!" Let's just say I had some well placed spies. 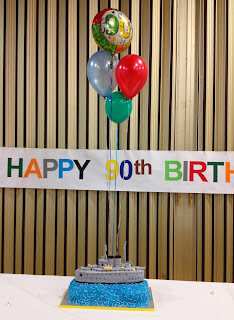 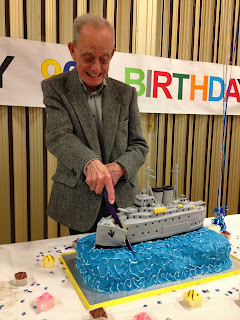 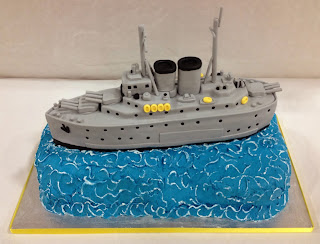 I had my worst cake disaster yet with this cake. Here is an original photo of this cake: 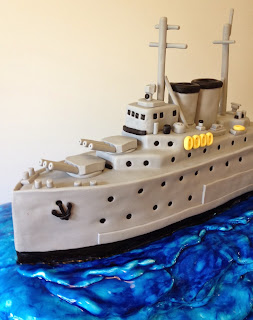 Notice how the ocean looks significantly different? Something went very wrong in the structure of this cake, when we arrived at the venue and I opened my boot, I peered down on complete destruction! I have never felt that awful. Thankfully the ship itself was practically unscathed, and there was enough solid cake left to make a very hurried repair. I rushed home, made up a big bowl of blue buttercream and remade the ocean with only minutes to spare. Well, as they say, all's well that end's well, and Bro. Bill was absolutely thrilled with his cake :)