"Now I am the master!" [Darth Vader Cake] 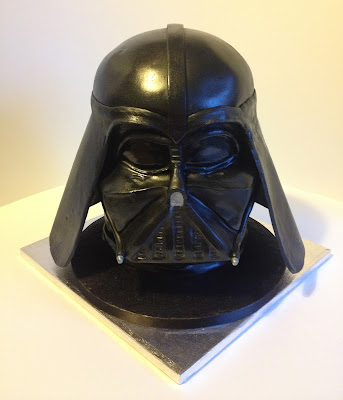 I was asked to make a cake for a young man who is a fan of Star Wars. I started picturing light sabres and Death Stars, but since his favourite character was Darth Vader, I asked whether he would like his cake to look like Darth Vader's mask. For the first week after it was decided that this was what I would do, I was excited about the challenge. Then I started thinking about how I was actually going to make the cake, every second day I came up with a whole new plan. I looked on the internet to see what other people had done, but strangely, there don't seem to be very many life-sized Darth Vader head cakes out there. By the time I actually started making the cake, I was winging it, making it up as I went along. Half way through, disaster struck and I practically had to start from scratch (except for the baking). The day before it was due, I was having visions of calling my client up and telling them that there would be no cake! Somehow, I figured it out and it all came together. I was going to say that I will never tackle a cake like this again, but then I realised that I now know how to tackle a cake like this. So bring it on! 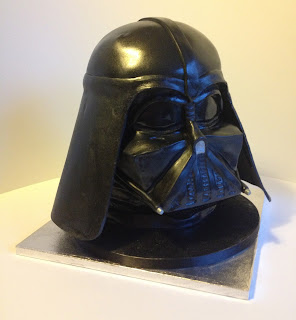 For those of you with a dislike of black icing, I'm with you there! There is no black icing on this cake. It was all sculpted with white fondant, and then sprayed black. I find that this tastes a whole bunch better, and reduces staining of mouths tremendously. The cake is dark chocolate sponge with vanilla buttercream icing. And just so that you can see just how big it is, here is my daughter with it. 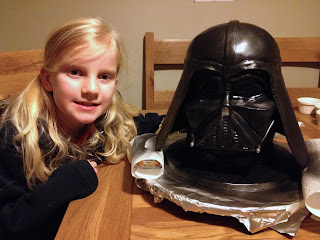