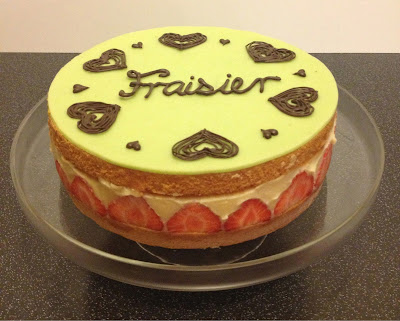 I have been watching one of my favourite shows on TV, The Great British Bake Off . A couple of weeks ago they made Fraisier cakes (recipe), a cake my husband loves. He gets it occasionally (because it is pricey) from PAUL in London, so last weekend I decided to treat him and make a Fraisier cake myself.

First I started off with the Genoise sponge, which is a new technique to me, but it came out beautifully! It doesn't rise much, but has a lovely fine, light texture. 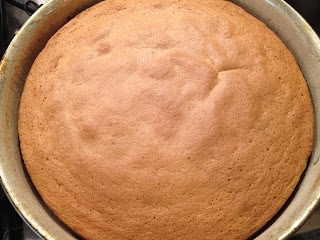 While that was baking, I made the crème pâtissière (sans the kirsch), spooned it into a piping bag and put it into the fridge to cool. 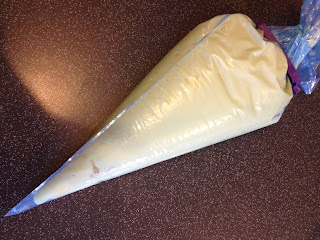 Next came the lemon sauce. While this tasted yummy, we felt that it overpowered all the other flavours in the cake. I made the cake again this weekend, but this time I used an apricot glaze instead, and we all agreed that we preferred that. 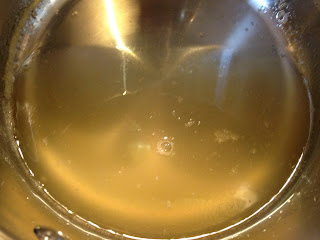 I prepared my marzipan, washed and cut all the strawberries, but the cake and crème pâtissière were not quite cool enough to start assembling. So I decided to go extra fancy and made some chocolate decorations. I carefully tempered my chocolate, then piped a few designs. 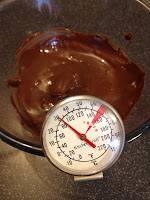 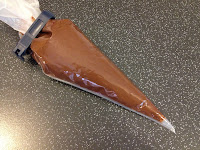 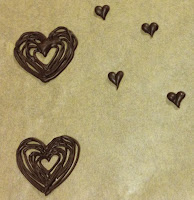 By now everything has cooled as was ready, so assembly began. I split the sponge in half, then placed the bottom half into the plastic collar lining the inside my cake ring (cut side upwards), and brushed on half the lemon sauce (or apricot glaze). The cake needs to be pressed gently up against the sides of the collar, making sure it touches the collar all the way around. 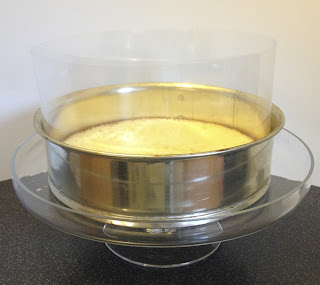 Next I carefully placed halved strawberries all the way around the edge of the cake, 'sticking' the cut side of the strawberry on to the plastic collar. Then filled in between them with crème pâtissière and piped a layer of crème pâtissière on to the sponge. 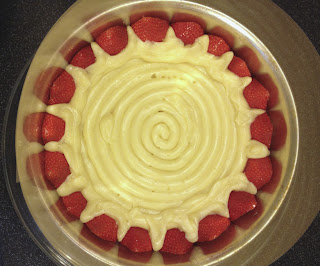 On top of that goes the top half of the sponge (with cut side upwards), brushed with lemon sauce (or apricot glaze) and again gently pressed up to the sides of the collar. Finally the marzipan disc is added to the top and the whole thing goes into the fridge to set. I tinted my marzipan green because that's how they do it at PAUL and I think it looks very pretty contrasting with the red of the strawberries. 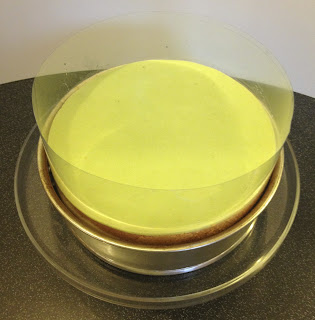 It looked so pretty when the cake ring finally came off once it was set! 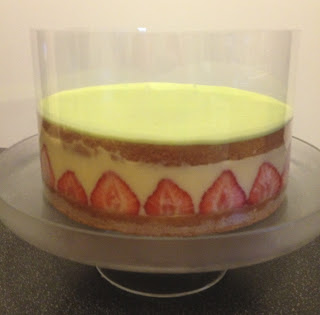 And the collar is peeled away.

I wasn't sure how long to leave it to set for, I left my first one for about an hour (we were very eager to try it), but I think the crème pâtissière could have done with a bit longer as it was a bit soft when I took the collar off and made little 'peaks' which looked a bit untidy to me. The second cake was left in the fridge all afternoon, and had a much better finish when the collar came off. 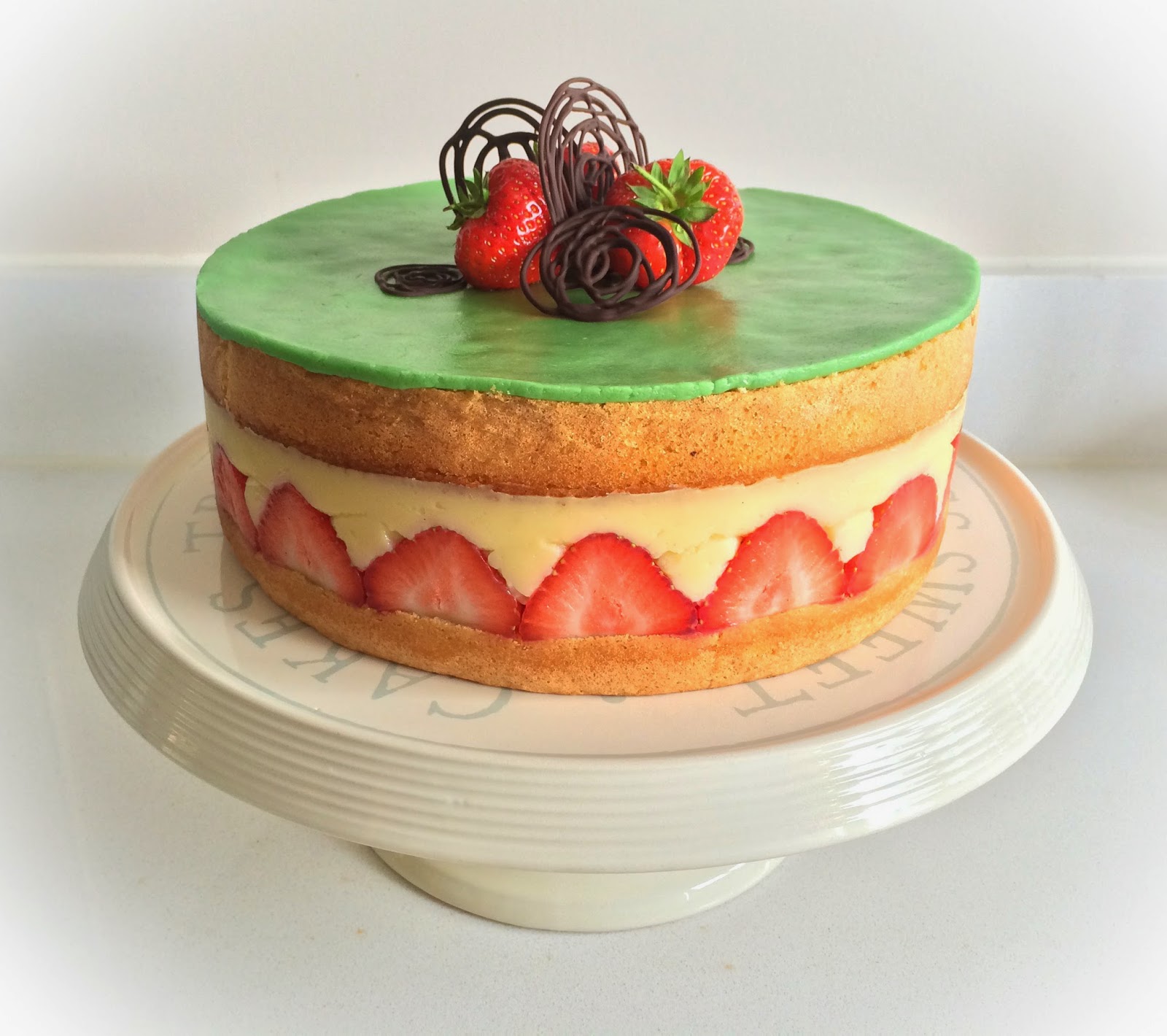 It can be decoraed with a dusting of icing sugar, strawberries, chocolate decorations, spun sugar, whatever you prefer. Serve chilled and add your decorations last minute. 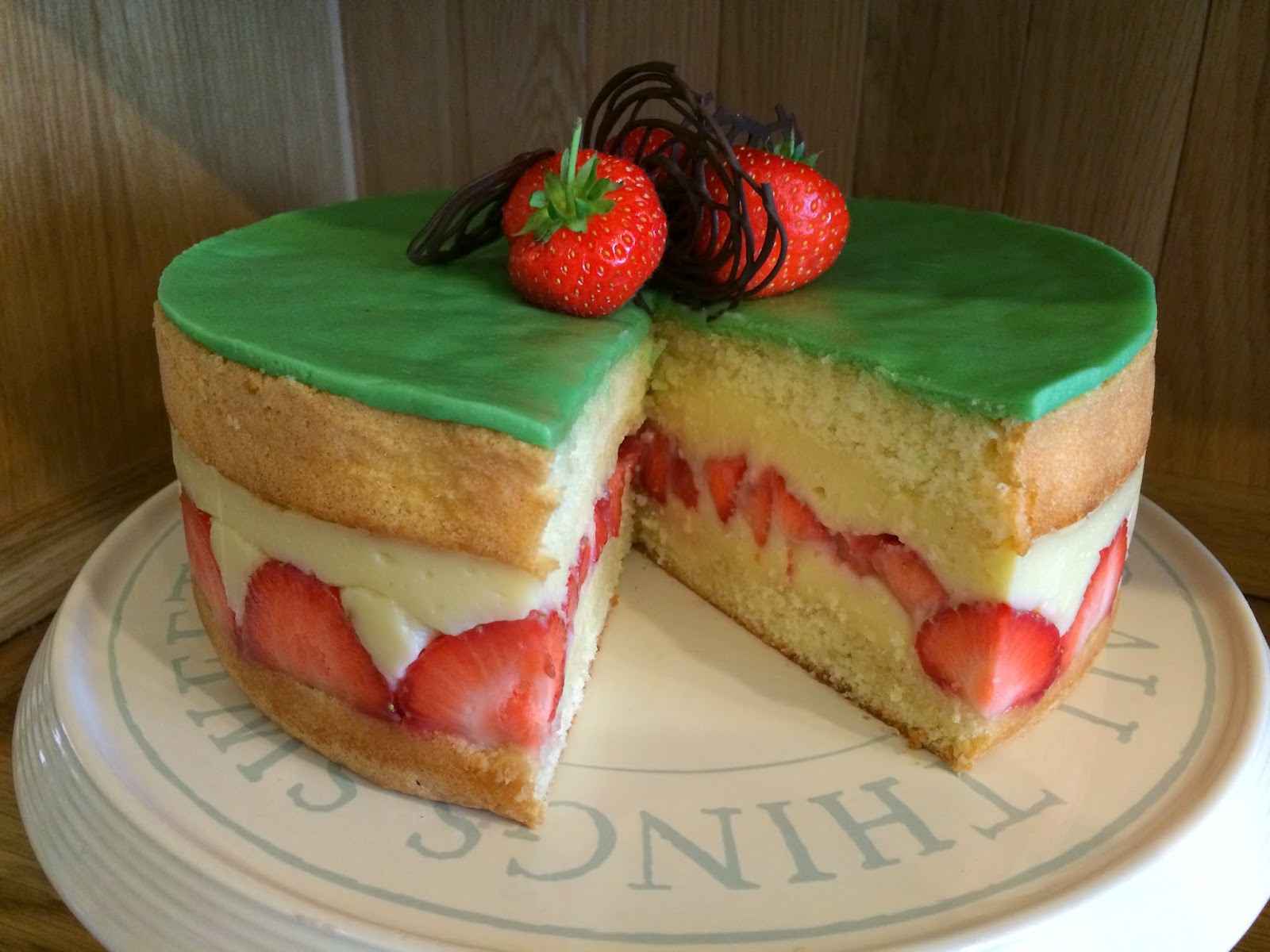